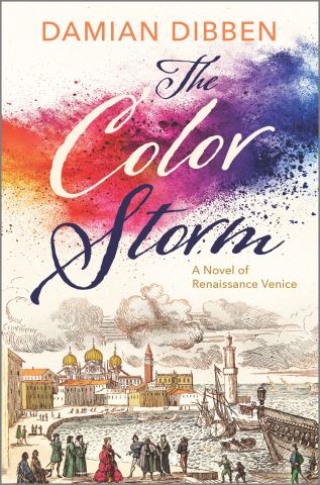 A Novel of Renaissance Venice

Enter the world of Renaissance Venice, where the competition for fame and fortune can mean life or death…

Artists flock here, not just for wealth and fame, but for revolutionary color. Yet artist Giorgione “Zorzo” Barbarelli’s career hangs in the balance. Competition is fierce, and his debts are piling up. When Zorzo hears a rumor of a mysterious new pigment, brought to Venice by the richest man in Europe, he sets out to acquire the color and secure his name in history.

Winning a commission to paint a portrait of the man’s wife, Sybille, Zorzo thinks he has found a way into the merchant’s favor. Instead he finds himself caught up in a conspiracy that stretches across Europe and a marriage coming apart inside one of the floating city’s most illustrious palazzi.

As the water levels rise and the plague creeps ever closer, an increasingly desperate Zorzo isn’t sure whom he can trust. Will Sybille prove to be the key to Zorzo’s success or the reason for his downfall?

Atmospheric and suspenseful and filled with the famous artists of the era, The Color Storm is an intoxicating story of art and ambition, love and obsession.

Damian Dibben: DAMIAN DIBBEN is the creator of the internationally acclaimed children’s book series the History Keepers, translated into 26 languages in over 40 countries. Previously, he worked as a screenwriter, and actor, on projects as diverse as The Phantom of the Opera and Puss in Boots and Young Indiana Jones. He lives, facing St Paul’s Cathedral, on London’s Southbank with his partner Ali and dog Dudley.