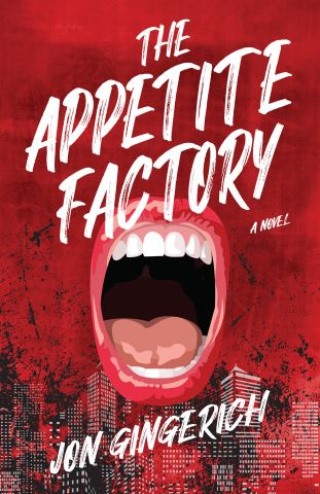 As head of the crisis management team at a Madison Avenue PR firm, Leonard Lundell spends his days counseling executives whose reputations have been ruined by scandal. But Leonard has been managing a strange and debilitating crisis of his own that’s held him captive his entire adult life: Leonard likes to eat soap, pencils, paint chips—anything with no nutritional value.

For years, he’s kept his compulsion hidden behind a professional veneer. But when he signs an important client, an antisocial file clerk unwittingly discovers Leonard’s secret and blackmails him into accommodating her own bizarre culinary indulgences.

A picaresque set against the backdrop of Madison Avenue’s marketing machine in the months leading up to the 2008 financial crisis, The Appetite Factory examines the earliest days of our post-truth era, where a scandal-obsessed news cycle and social media’s rise as an information platform have given birth to a culture addicted to recreational outrage and hell-bent on finding the next public figure to disgrace to keep ourselves entertained.

Jon Gingerich is a fiction instructor at the Gotham Writers’ Workshop in New York. Since 2006, he’s served as the editor of O’Dwyer’s magazine. His short stories have been published in The Saturday Evening Post, The Malahat Review, Pleiades, Grist, Stand, Oyez Review, The Helix, and others. Jon’s freelance writing regularly appears in trade and consumer magazines, as well as web outlets dedicated to politics, culture, and writing craft. He’s a graduate of The New School’s creative writing MFA program. He lives in New York City.