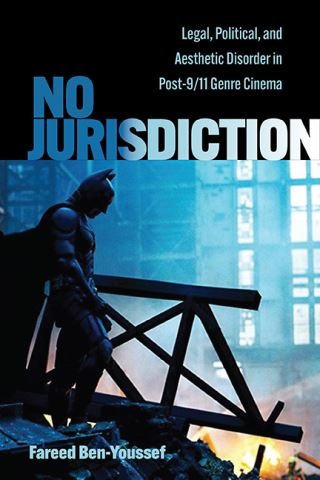 No Jurisdiction interweaves autobiography and analysis to explore how a disabled American of French-Arab descent justifies his love for the (super)heroes who destroy brown people like himself. Framing Hollywood genre films as a key to understanding a crisis-filled world shaped by the global War on Terror, Fareed Ben-Youssef shows how, in response to 9/11, filmmakers and lawmakers mobilized iconic characters—the cowboy, the femme fatale, and the superhero—to make sense of our traumas and inspire new legal landscapes. The competing visions of power produced in this dialogue between Hollywood entertainment and mainstream politics underscore genre cinema's multivalent purpose: to normalize state violence and also to critique it.

Chapters devoted to the Western, film noir, superhero movies, and global films that deploy and comment on these genres offer compelling readings of films ranging from the more apparent (The Dark Knight, Sicario, and Logan) to the more unexpected (Sin City, Adieu Gary, The Broken Circle Breakdown, and Tokyo Sonata). Through narratives of states of emergency that include vaguely defined enemies, obscured battlefield boundaries, and blurred lines between victims and perpetrators, a new post-9/11 film canon emerges. No Jurisdiction is a deeply personal work of film scholarship, arguing that we can face our complicity and discover opportunities for resistance through our beloved genre movies.