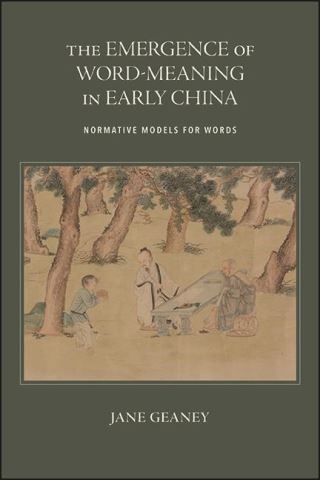 The Emergence of Word-Meaning in Early China

The Emergence of Word-Meaning in Early China makes an innovative contribution to studies of language by historicizing the Chinese notion that words have "meaning" (content independent of instances of use). Rather than presuming that the concept of word-meaning had always existed, Jane Geaney explains how and why it arose in China. To account for why a normative term (yi, "duty, morality, appropriateness") came to be used for "meanings" found in dictionaries, Geaney examines interrelated patterns of word usage threading through and across a wide range of genres. These patterns show that by the first millennium, as textual production exploded—and as radically different writing forms (in Buddhist sutras) were encountered—yi already functioned as an externally accessible "model" for semantic interpretation of texts and sayings.

The book has far-reaching implications. Because the idea of word-meaning is fundamental to theorizing, the book illuminates not only semantic ideas and the normativity of language in Early China, but also aspects of early Chinese philosophy and intellectual history. As the internet supplants one form of media (print), thereby reducing knowledge to vast digital databases, so too, this book explains, two thousand years ago a culture that prized oral and visual balance became an "empire of the text."

Jane Geaney: Jane Geaney is Professor of Religious Studies at the University of Richmond. She is the author of Language as Bodily Practice in Early China: A Chinese Grammatology, also published by SUNY Press, and On the Epistemology of the Senses in Early Chinese Thought.