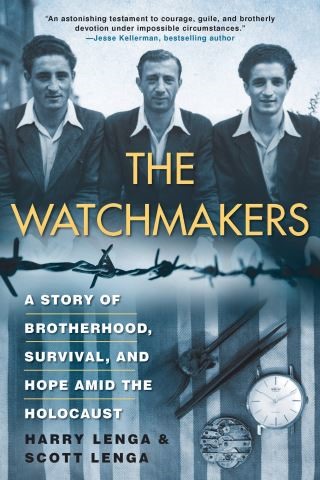 A Powerful WW2 Story of Brotherhood, Survival, and Hope Amid the Holocaust

Told through meticulous interviews with his son, this is an extraordinary memoir of endurance, faith, and a unique skill that kept three brothers together—and alive—during the darkest times of World War II.

Harry Lenga was born to a family of Chassidic Jews in Kozhnitz, Poland. The proud sons of a watchmaker, Harry and his two brothers, Mailekh and Moishe, studied their father’s trade at a young age. Upon the German invasion of Poland, when the Lenga family was upended, Harry and his brothers never anticipated that the tools acquired from their father would be the key to their survival.

Under the most devastating conditions imaginable—with death always imminent—fixing watches for the Germans in the ghettos and brutal slave labor camps of occupied Poland and Austria bought their lives over and over again. From Wolanow and Starachowice to Auschwitz and Ebensee, Harry, Mailekh, and Moishe endured, bartered, worked, prayed, and lived to see liberation.

Derived from more than a decade of interviews with Harry Lenga, conducted by his own son Scott and others, The Watchmakers is Harry’s heartening and unflinchingly honest first-person account of his childhood, the lessons learned from his own father, his harrowing tribulations, and his inspiring life before, during, and after the war. It is a singular and vital story, told from one generation to the next—and a profoundly moving tribute to brotherhood, fatherhood, family, and faith.

Harry Lenga:
Harry Lenga was born in 1919 to a family of Chassidic Jews in Kozhnitz, Poland, where his father taught him and his brothers the watchmaking trade that would save their lives during the war. Harry was working in Warsaw when the Germans invaded Poland in 1939, and escaped from the Warsaw Ghetto in 1941 to reunite with his family in the Kozhnitz Ghetto. The night before the Germans murdered its entire Jewish population—including his remaining family members—Harry and two of his brothers escaped Kozhnitz to a nearby Polish-run labor camp. From there the three brothers were transported between 1942 and 1945 to the camps in Wolanow, Starachowice, and Auschwitz, and then to the Austrian concentration camps of Mauthausen, Melk, and Ebensee. All three were liberated by the U.S. Army on May 6, 1945. In 1949, Harry immigrated to St. Louis, Missouri, where he married, had three sons, and went on to have three granddaughters. He continued working as a watchmaker for nearly thirty years before retiring and later moving with his wife to Israel. Harry Lenga died on January 2, 2000 at the age of eighty.
|||
Scott Lenga is the son of Harry Lenga. A native of St. Louis, Missouri, he holds a BA in economics from UC Berkeley and a law degree from UCLA. He and his wife live in Israel, where they raised three daughters who grew up listening to stories about the grandfather they never really knew. In addition to writing and speaking about his family’s experiences during and after World War II, he serves as a corporate and intellectual property lawyer for technology companies. Visit him online at ScottLenga.com.