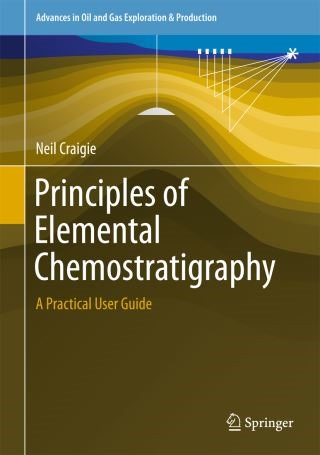 This book provides the reader with a comprehensive understanding of the applications of chemostratigraphy. The first chapter of the book offers an introduction to the technique. This is followed by a chapter detailing sample preparation and analytical techniques. Chapter 3 focuses on the techniques utilised to establish the mineralogical affinities of elements, while the general principles of how to build a chemostratigraphic scheme are covered in Chapter 4. Chapters 5, 6 and 7 provide information on the applications of chemostratigraphy to clastic, carbonate and unconventional reservoirs respectively, and various case studies are presented. Wellsite applications, a discussion and conclusion section form the latter part of the book.
The book will appeal to graduate and post graduate students of geology and professionals working in the hydrocarbon sector as a key reference text in chemostratigraphy.

Neil Craigie: ​Dr Neil W. Craigie first became interested in geology during his experiences of attending Boy Scout camps in the early 1980’s and this inspired him to embark on a BSc degree in Geology at the University of St. Andrews, Scotland, in 1988. After this, Neil wished to enter the petroleum industry but felt that he required additional qualifications, so he decided to complete an MSc degree in Petroleum Geology at the University of Aberdeen, Scotland.  Unlike many of his colleagues at that time, he preferred to work towards a PhD at the same university, instead of gaining employment immediately after graduation. This was awarded in 1998 on completion of his thesis on the chemostratigraphy and sedimentology of Middle Devonian lacustrine sediments encountered in the Orcadian Basin, NE Scotland. During this study Neil realized that, though chemostratigraphy could be employed as a stand-alone reservoir correlation technique, it worked best as part of a multidisciplinary approach to correlation. On completing his PhD, Neil worked as a Geologist for Scott Pickford Ltd until the year 2000, and then as a chemostratigrapher for Chemostrat Ltd and Ichron Ltd. He is currently employed as a “geological consultant” for Saudi Aramco in Dhahran, Saudi Arabia, where he works on and manages a range of chemostratigraphy projects. Since 1997, Neil has completed chemostratigraphy studies throughout Saudi Arabia, the North Sea (UK, Norwegian, Dutch and Danish sectors), Norwegian Sea, Barents Sea, Canada, USA, Bolivia, Brazil, Egypt, Algeria, Libya and Qatar. Most of these studies have involved the integration of chemostratigraphic, sedimentological and biostratigraphy data and some have taken the form of ‘near real time’ wellsite work. Neil has published numerous papers and is widely regarded as one of the world’s leading experts in the field of elemental chemostratigraphy. He is delighted to share his knowledge and experience of the technique with readers of this book. Outside work, Neil enjoys fishing, walking and spending time with his family.