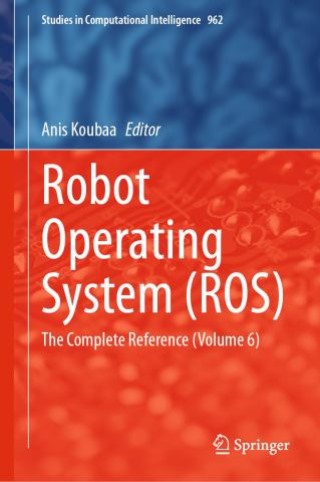 This book is the sixth volume of the successful book series on Robot Operating System: The Complete Reference. The objective of the book is to provide the reader with comprehensive coverage of the Robot Operating Systems (ROS) and the latest trends and contributed systems. ROS is currently considered as the primary development framework for robotics applications.

There are seven chapters organized into three parts.

Part I presents two chapters on the emerging ROS 2.0 framework; in particular, ROS 2.0 is become increasingly mature to be integrated into the industry. The first chapter from Amazon AWS deals with the challenges that ROS 2 developers will face as they transition their system to be commercial-grade. The second chapter deals with reactive programming for both ROS1 and ROS. In Part II, two chapters deal with advanced robotics, namely on the usage of robots in farms, and the second deals with platooning systems. Part III provides three chapters on ROS navigation. The first chapter deals with the use of deep learning for ROS navigation. The second chapter presents a detailed tuning guide on ROS navigation and the last chapter discusses SLAM for ROS applications. I believe that this book is a valuable companion for ROS users and developers to learn more ROS capabilities and features.