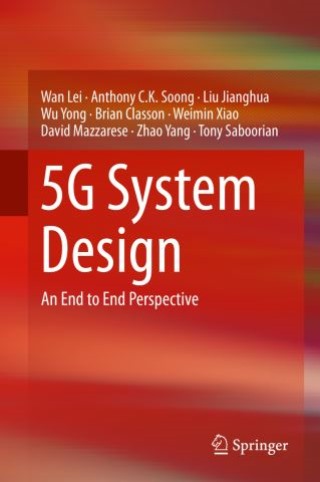 An End to End Perspective

This book presents a detailed pedagogical description of the 5G commercial wireless communication system design, from an end to end perspective. It compares and contrasts NR with LTE, and  gives a concise and highly accessible description of the key technologies in the 5G physical layer, radio access network layer protocols and procedures. This book also illustrates how the 5G core and EPC is integrated into the radio access network, how virtualization and edge computer fundamentally change the way users interact with the network, as well as 5G spectrum issues.
This book is structured into six chapters. The first chapter reviews the use cases, requirements, and standardization organization and activities for 5G. These are 5G requirements and not NR specifically, as technology that meets the requirements, may be submitted to the ITU as 5G technology. This includes a set of Radio Access Technologies (RATs), consisting of NR and LTE; with each RAT meeting different aspects of the requirements. The second chapter describes the air interface of NR and LTE side by side. The basic aspects of LTE that NR builds upon are first described, followed by sections on the NR specific technologies, such as carrier/channel, spectrum/duplexing (including SUL), LTE/NR co-existence and new physical layer technologies (including waveform, Polar/LDPC codes, MIMO, and URLLC/mMTC). In all cases the enhancements made relative to LTE are made apparent.
The third chapter contains descriptions of NR procedures (IAM/Beam Management/Power control/HARQ), protocols (CP/UP/mobility, including grant-free), and RAN architecture. The fourth chapter includes a detailed discussion related to end-to-end system architecture, and the 5G Core (5GC), network slicing, service continuity, relation to EPC, network virtualization, and edge computing. The fifth and major chapter describes the ITU submission and how NR and LTE meet the 5G requirements in significant detail, from the rapporteur responsible for leading the preparation and evaluation, as well as some field trial results.
Engineers, computer scientists and professionals with a passing knowledge of 4G LTE and a comprehensive understanding of the end to end 5G commercial wireless system will find this book to be a valuable asset. Advanced-level students and researchers studying and working in communication engineering, who want to gain an understanding of the 5G system (as well as methodologies to evaluate features and technologies intended to supplement 5G) will also find this book to be a valuable resource.