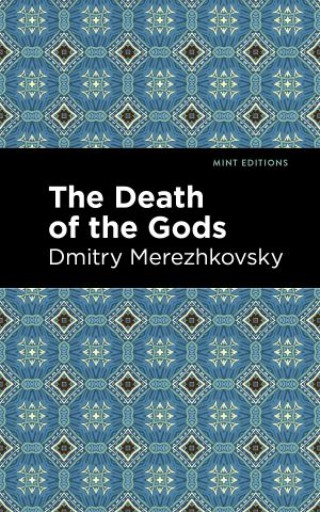 The Death of the Gods

The Death of the Gods (1895) is a novel by Dmitriy Merezhkovsky. Having turned from his work in poetry to a new, spiritually charged interest in fiction, Merezhkovsky sought to develop his theory of the Third Testament, an apocalyptic vision of Christianity’s fulfillment in twentieth century humanity. The Death of the Gods the first work in the trilogy, is followed by Resurrection of the Gods (1900) and Peter and Alexis (1904). Well received internationally, The Christ and Antichrist Trilogy was largely ignored by Russian critics at the time of its publication, but has since been recognized as his most original and vital literary work. “‘Julian!’ a voice cried; ‘Julian, Julian! Where in the world is he? Eutropius is looking for you to go to church with him.’ The boy shivered, and nimbly hid his handiwork inside the altar of Pan. He smoothed his hair, shook his clothes, and when he came out of the grotto had resumed an expression of impenetrable Christian hypocrisy.” In The Death of the Gods, Emperor Julian, recognizing the increasing popularity of Christianity among the Roman people, makes a final attempt to plant the Olympian Gods at the center of spiritual life. Opposed to the asceticism of early Christians, Julian views the emerging religion as a sacrifice of worldly existence and human connection in favor of a metaphysical ideal. Despite his idealism, the inexorable current of history dooms him from the beginning. With a beautifully designed cover and professionally typeset manuscript, this edition of Dmitriy Merezhkovsky’s The Death of the Gods is a classic of Russian literature reimagined for modern readers.

Dmitry Merezhkovsky (1866-1941) was a Russian novelist and poet. Born in Saint Petersburg, Merezhkovsky was raised in a prominent political family. At thirteen, while a student at the St. Petersburg Third Classic Gymnasium, Dmitry began writing poetry. Soon, he earned a reputation as a promising young writer and enrolled at the University of Saint Petersburg, where he completed his PhD with a study on Montaigne. In 1892, he published Symbols. Poems and Songs, a work inspired by Poe and Baudelaire in which Merezhkovsky explores his increasingly personal religious ideas. In 1895, he published The Death of the Gods, the first novel in his groundbreaking Christ and Antichrist Trilogy. With these novels, Merezhkovsky was recognized as a cofounder of the Russian Symbolist movement. In 1905, his apocalyptic Christian worldview seemed to come to fruition in the First Russian Revolution, which he supported through poetry and organizing groups of students and artists. Formerly a supporter of the Tsar, Merezhkovsky was involved in leftist politics by 1910, but soon became disillusioned with the rise of the radical Bolsheviks. In the aftermath of the October Revolution, Merezhkovsky and his wife, the poet Zinaida Gippius, were forced to flee Russia. Over the years, they would find safe harbor in Warsaw and Paris, where Merezhkovsky continued to write works of nonfiction while advocating for the Russian people. Toward the end of his life, he came to see through such leaders as Benito Mussolini, Francisco Franco, and Adolf Hitler a means of defeating Communism in Russia. Though scholars debate his level of commitment to fascist and nationalist ideologies, this nevertheless marked a sinister turn in an otherwise brilliant literary career. Nominated for the Nobel Prize in literature nine times without winning, Merezhkovsky is recognized as an important figure of the Silver Age of Russian art.