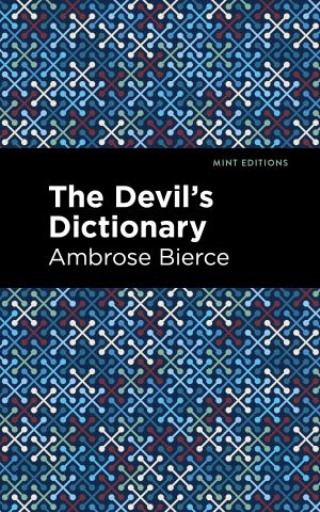 The Devil’s Dictionary (1906) is a work of satire by Ambrose Bierce. Although he is commonly remembered for his chilling short stories on the experiences of Civil War soldiers, Bierce was recognized in his day as a leading journalist and humorist who spent decades ruffling feathers and drawing laughter with his witty opinion columns, poems, and definitions. Toward the end of his career, he decided to compile these satirical definitions into a book, following in the footsteps of Samuel Johnson, Noah Webster, and Gustave Flaubert. Immensely popular upon publication, The Devil’s Dictionary inspired countless imitators, but remains one-of-a-kind. Reading Bierce’s definitions today, it’s not hard to imagine the controversy they must have caused, matched only by the laughs they must have roused, when published at the onset of the twentieth century. Written during a period of undaunted industrial growth, of immense wealth and promise in a nation recently torn apart by civil war, The Devil’s Dictionary preserves a tantalizing touch of irreverence and doubt which must remain funny to those who know humor when they sense it. “AIR, n. A nutritious substance supplied by a bountiful providence for the fattening of the poor.” “CONSERVATIVE, n. A statesman who is enamoured of existing evils, as distinguished from the Liberal, who wishes to replace them with others.” Crafted for the cynic, quoted by the misanthrope, Bierce’s definitions prove profoundly entertaining and frequently accurate—sort of—over a century after they were published. With a beautifully designed cover and professionally typeset manuscript, this edition of Ambrose Bierce’s The Devil’s Dictionary is a classic of American literature reimagined for modern readers.

Ambrose Bierce (1842-1914) was an American novelist and short story writer. Born in Meigs County, Ohio, Bierce was raised Indiana in a poor family who treasured literature and extolled the value of education. Despite this, he left school at 15 to work as a printer’s apprentice, otherwise known as a “devil”, for the Northern Indianan, an abolitionist newspaper. At the outbreak of the American Civil War, he enlisted in the Union infantry and was present at some of the conflict’s most harrowing events, including the Battle of Shiloh in 1862. During the Battle of Kennesaw Mountain in 1864, Bierce—by then a lieutenant—suffered a serious brain injury and was discharged the following year. After a brief re-enlistment, he resigned from the Army and settled in San Francisco, where he worked for years as a newspaper editor and crime reporter. In addition to his career in journalism, Bierce wrote a series of realist stories including “An Occurrence at Owl Creek Bridge” and “Chickamauga,” which depict the brutalities of warfare while emphasizing the psychological implications of violence. In 1906, he published The Devil’s Dictionary, a satirical dictionary compiled from numerous installments written over several decades for newspapers and magazines. In 1913, he accompanied Pancho Villa’s army as an observer of the Mexican Revolution and disappeared without a trace at the age of 71.