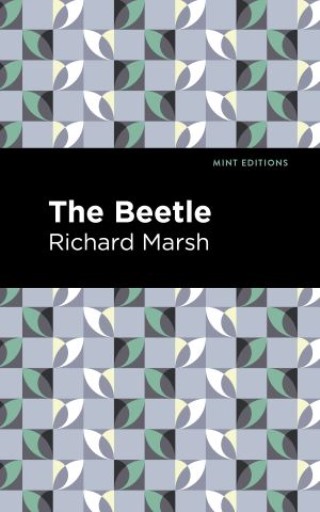 The Beetle (1897) is a novel by Richard Marsh. Immensely popular upon publication, The Beetle was an instant bestseller and went on to inspire a 1919 silent film adaptation starring Maudie Dunham. Despite its success, the novel was largely forgotten until scholarly attention in the late-20th century highlighted its importance to the fields of gothic fiction, postcolonial criticism, and women and gender studies. “To have tramped about all day looking for work; to have begged even for a job which would give me money enough to buy a little food; and to have tramped and to have begged in vain,—that was bad. But, sick at heart, depressed in mind and in body, exhausted by hunger and fatigue, to have been compelled to pocket any little pride I might have left, […] and to solicit it in vain!—that was worse. Much worse.” Down on his luck, Robert Holt wanders the streets of London in search of food, a job, and shelter. Turned away from a Fulham workhouse, he finds himself standing before a seemingly abandoned house and, with nowhere to go, cautiously enters. There, he comes face to face with the mysterious Beetle, a figure from ancient Egypt who controls his subjects with mesmerism. Soon, Robert is used to commit a series of crimes against Paul Lessingham, a powerful member of the House of Commons. As the plot unfolds, a love triangle involving Lessingham, the beautiful Marjorie Lindon, and a vindictive chemist named Sydney Atherton falls victim to the scheming Beetle. With a beautifully designed cover and professionally typeset manuscript, this edition of Richard Marsh’s The Beetle is a classic work of British horror fiction reimagined for modern readers.

Richard Marsh (1857-1915) was the pseudonym of bestselling English author Richard Bernard Heldmann. Born in North London to Jewish parents, he began publishing adventure stories for boys in 1880. He soon found work as co-editor of Union Jack, a weekly boy’s magazine, but this arrangement ended by June 1883 with his arrest for cheque forgery. Sentenced to eighteen months of hard labor, Heldmann emerged from prison and began using his pseudonym by 1888. The Beetle (1897), his most commercially successful work, is a classic of the horror genre that draws on the tradition of the sensation novel to investigate such concerns of late-Victorian England as poverty, the New Woman, homosexuality, and empire. Published the same year as Bram Stoker’s Dracula, The Beetle was initially far more popular and sold out on its first printing almost immediately. His other works, though less successful, include The Goddess: A Demon (1900) and A Spoiler of Men (1905), both pioneering works of horror and science fiction. A prolific short story writer, he was published in Cornhill Magazine, The Strand Magazine, and Belgravia.