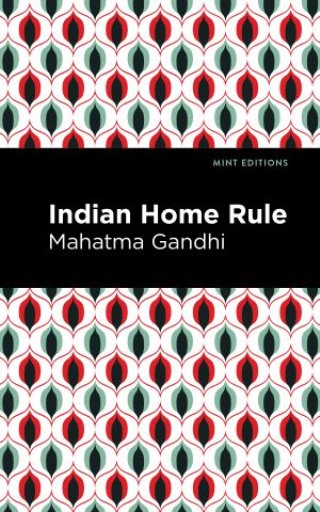 Indian Home Rule (1909) is a book by Mahatma Gandhi. Originally written in Gujarati while the author was traveling from London to South Africa, Indian Home Rule or Hind Swaraj is a groundbreaking text that laid out some of Gandhi’s core beliefs as an activist and political thinker. Banned in 1910 by the British government in India as a seditious text, Indian Home Rule remains essential to Gandhi’s legacy in his native country and around the world. “It is my deliberate opinion that India is being ground down, not under the English heel, but under that of modern civilization. It is groaning under the monster's terrible weight. There is yet time to escape it, but every day makes it more and more difficult.” In Indian Home Rule, styled as a conversation between a Reader and an Editor, Gandhi makes his case for Indian independence or Swaraj, explains his concept of Swadeshi (self-reliance), and argues that the Indian people have it within their power to not only expel the British, but to govern themselves while remaining true to their cultural and religious traditions. Through his rejection of Western civilization and advocacy for nonviolent resistance, Gandhi laid the foundation for the vital work he would undertake upon returning to India in 1915. With a beautifully designed cover and professionally typeset manuscript, this edition of Mahatma Gandhi’s Indian Home Rule is a classic of Indian literature reimagined for modern readers.

Mahatma Gandhi (1869-1948) was an Indian lawyer, nationalist, and civil rights activist. Born Mohandas Karamchand Gandhi, he was first given the honorary title of Mahatma—Sanskrit for “great-souled”—in 1914 while living in South Africa. Raised in Gujarat in a prominent Hindu family, he travelled to London and studied law at the Inner Temple. Called to the Bar in 1891, Gandhi returned to India for a brief time before settling in South Africa. There, he started a family while perfecting his style of nonviolent resistance grounded in civil disobedience. In 1915, he returned to his native country to join the fight against British rule, organizing peasants across India to take a stand against taxation, racism, and other forms of colonial oppression. He became the leader of the Indian National Congress in 1921 and increased his involvement with the movements for women’s rights, religious and ethnic equality, and the elimination of India’s caste system, which unjustly effected Dalits deemed untouchable from birth. His central cause, however, was Swaraj, which can be translated as self-governance or democracy. As his popularity increased, he simplified his lifestyle in solidarity with the Indian poor, wearing traditional clothing, eating vegetarian food, and fasting as a matter of personal hygiene and protest. In 1930, he led the twenty-five day Dandi Salt March or Salt Satyagraha, in response to a British salt tax, inspiring millions of Indians to take direct action against British rule. A proponent of religious pluralism, he lamented the interfaith violence between Hindus, Sikhs, and Muslims that broke out following independence and the partition of India and Pakistan in 1947. At 78 years old, he was assassinated by a Hindu nationalist for his outreach to the Muslim community.