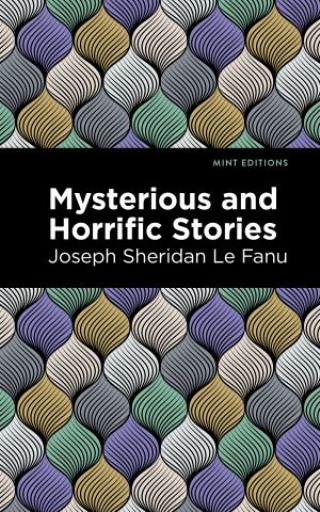 Mysterious and Horrific Stories is a collection of Gothic tales by Joseph Sheridan Le Fanu. Although he is more widely known today for his novella Carmilla (1872), which influenced Bram Stoker’s Dracula (1897) and remains an important work of early vampire fiction, Le Fanu was also an influential figure in mid-nineteenth century Irish literature as a writer and editor for the Dublin University Magazine.

Mysterious and Horrific Stories collects fifteen of Le Fanu’s finest works of short fiction from across his storied career. In “The Fortunes of Sir Robert Ardagh,” a man returns home after years abroad accompanied by a strange, shadowy companion. Under mysterious circumstances, Sir Robert has amassed a tremendous fortune and seems either unwilling or unable to reveal the truth behind his sudden rise to wealth. In “Schalken the Painter,” a young Dutch apprentice falls in love with his master’s young niece, the beautiful Rose Velderkaust. Fearful of angering the great painter Gerard Douw, whom he worries would reject a marriage proposal from a struggling artist, he keeps silent about his affections. When an older, wealthier man proposes to Rose, Douw consents to their marriage despite the man’s unsettling appearance. “The Drunkard’s Dream” is a tale of horror in which a man receives a powerful and terrifying vision of Hell.

Alongside twelve more tales of ghosts and other supernatural forces, including “An Authentic Narrative of a Haunted House” and “The Child That Went With the Fairies,” these selections from Le Fanu’s body of work continue to entertain and astound nearly two centuries after they first appeared in print. With a beautifully designed cover and professionally typeset manuscript, this edition of Joseph Sheridan Le Fanu’s Mysterious and Horrific Stories is a classic of Irish literature reimagined for modern readers.

Joseph Sheridan Le Fanu (1814-1873) was an Irish writer of Gothic horror. Born in Dublin, Le Fanu was raised in a literary family. His mother, a biographer, and his father, a clergyman, encouraged his intellectual development from a young age. He began writing poetry at fifteen and went on to excel at Trinity College, Dublin, where he studied law and served as Auditor of the College Historical Society. In 1838, shortly before he was called to the bar, he began contributing ghost stories to the Dublin University Magazine, of which he later became editor and proprietor. He embarked on a career as a writer and journalist, using his role at the magazine as a means of publishing his own fictional work. Le Fanu made a name for himself as a pioneer of mystery and Gothic horror with such novels as The House by the Churchyard (1863) and Uncle Silas (1864). Carmilla (1872), a novella, is considered an early work of vampire fiction and an important influence for Bram Stoker’s Dracula (1897).