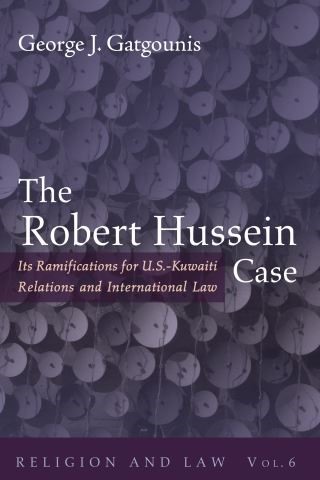 Its Ramifications for U.S.-Kuwaiti Relations and International Law

Of the many influential religious-liberty cases with which the Rev. Dr. George Gatgounis, Esq., has been involved, his work through the Rutherford Institute as counsel on the Robert Hussein case in Kuwait is certainly one of the most compelling. Hussein was a Kuwaiti citizen sentenced to death by his government in the 1990s for converting to Christianity. When efforts by his legal team and U.S. officials failed to overturn the sentence, Hussein fled to America but eventually converted back to Islam and returned to Kuwait. This thoroughly footnoted book provides unique insight into the Islamic legal system and how the United States might respond to it.

George J. Gatgounis: George J. Gatgounis, a Harvard alumnus, is a published author, trial attorney, ordained minister, and seminary professor. A member of the Harvard Faculty Club, he formerly served as one of the editors of the Harvard Civil Rights Law Review, and the Harvard Journal of Law and Public Policy. As an active Harvard alumnus, he serves as the moderator of the Harvard Reading Club of Charleston, South Carolina. He serves at Cummins Seminary as Professor of Hebrew Bible, and Professor of Greek Septuagint (LXX), Greek New Testament, and Greek Classics. He is also a South Carolina Supreme Court certified civil court mediator, family court mediator, and civil arbitrator.