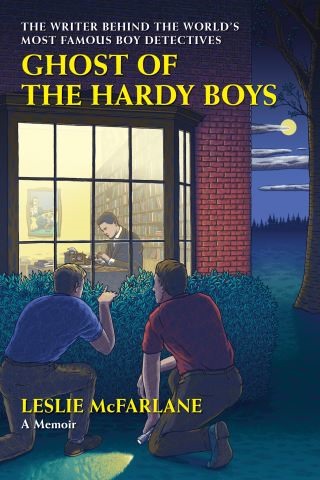 Ghost of the Hardy Boys

The Writer Behind the World’s Most Famous Boy Detectives

“Ghost of the Hardy Boys is an elegant book, full of charm and pathos and whimsy. The writing is restrained, the characterizations deep and rich, the humor nuanced.”
—Washington Post

As millions of boys and girls devoured the early adventures of the Hardy Boys, little did the young readers and aspiring sleuths know: the series’ author was not Franklin W. Dixon, as the cover trumpeted. It was Leslie McFarlane, a nearly penniless scribbler, who hammered out the first adventures while living in a remote cabin without electricity or running water in Northern Ontario. McFarlane was among the first bestselling ghostwriters and this, at last, is his story—as much fun as the stories he wrote.

In 1926, 23-year-old cub newspaper reporter Leslie McFarlane responded to an ad: “Experienced Fiction Writer Wanted to Work from Publisher’s Outlines.” The ad was signed by Edward Stratemeyer, whose syndicate effectively invented mass-market children’s book publishing in America. McFarlane, who had a few published adventure stories to his name, was hired and his first job was to write Dave Fearless Under the Ocean as Roy Rockwood—for a flat fee of $100, no royalties. His pay increased to $125 when Stratemeyer proposed a new series of detective stories for kids involving two high school aged brothers who would solve mysteries. The title of the series was The Hardy Boys. McFarlane’s pseudonym would be Franklin W. Dixon.

McFarlane went on to write twenty-one Hardy Boys adventures. From The Tower Treasure in 1927 to The Phantom Freighter in 1947, into full-fledged classics filled with perilous scrapes, loyal chums, and breakneck races to solve the mystery. McFarlane kept his ghostwriting gig secret until late in life when his son urged him to share the story of being the real Franklin W. Dixon. By the time McFarlane died in 1977, unofficial sales estimates of The Hardy Boys series already topped 50 million copies.

Ghost of the Hardy Boys is a fascinating, funny, and always charming look back at a vanished era of journalism, writing, and book publishing. It is for anyone who loves a great story and who’s curious about solving the mystery of the fascinating man behind one of the most widely read and enduring children’s book series in history.

Leslie McFarlane was a Canadian journalist and author who, under the famous pseudonym, Franklin W. Dixon, wrote the original Hardy Boys mysteries for the Stratemeyer Syndicate (also the creators of Nancy Drew, Tom Swift, and the Bobbsey Twins). McFarlane wrote twenty-one tales of Frank and Joe Hardy, as well as many other novels under both his name and various pennames. He had a long and award-winning career with the Canadian National Film Board and Canadian Broadcasting Corporation—his script for the documentary Herring Hunt was nominated for an Academy Award. McFarlane died in 1977.