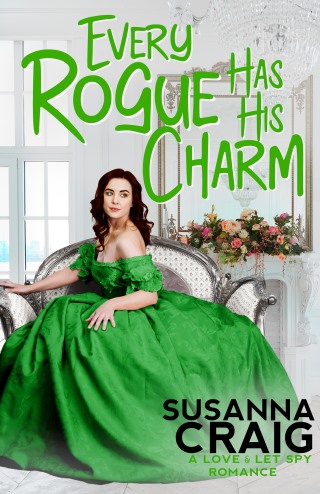 Every Rogue Has His Charm

Love, intrigue, and a fresh spin on historical romance make a sexy and suspenseful mix in the latest novel in Susanna Craig’s Regency-set series—as the wife one man left behind becomes the woman he can’t live without . . .

Caroline, Marchioness of Chesleigh, has been married for six years—at least in name. In fact, Caro has hardly seen her husband since the early days of their union. Scarred and reclusive, Maxim wasn’t ready to trust his wife with his secrets—or his heart. Instead, he quickly resumed his life of espionage in France, believing Caro was better off alone.

When the spy who left her returns upon inheriting the Dukedom, he finds his wife is not the girl she once was. Her heart is a little harder. She’s learned to stand on her own. Yet the desire that once ignited between them burns as hotly as ever . . .

Now, the more Caro learns about the past Maxim tried to hide from her, the deeper their bond grows. But danger haunts her husband’s every move, jeopardizing their passionate reunion . . .


PRAISE FOR WHO’S THAT EARL

Susanna Craig:
Almost as soon as she could hold a pencil, Susanna Craig began writing stories. Today, she pens award-winning Regency-era romance novels that blend history and heart with a dash of heat. An English professor, wife, and mom, she’s currently finding her happily ever after in Kentucky while holding onto her Midwestern roots. Find her online at www.susannacraig.com.