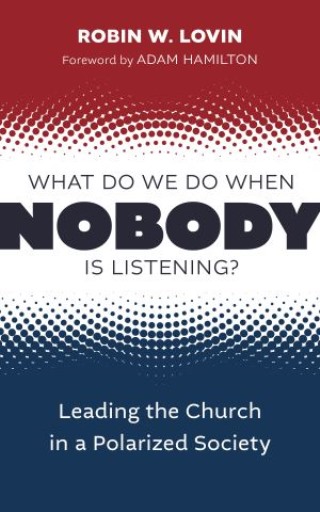 What Do We Do When Nobody Is Listening?

Leading the Church in a Polarized Society

A trusted senior statesman in Christian ethics and ministry addresses the crisis of political polarization threatening the existence of the church.

Polarization and political gridlock have been the norm in the United States for decades. As that reality seeps into every aspect of our society, churches find themselves not only affected, but often at the very center of the conflict. Rather than remaining places of inclusive community and generous dialogue, our sanctuaries have too often become ground zero of the culture wars.

What can pastors do to restore the church’s witness to the unity of all things in God—especially when it feels like members of the congregation would rather position the church’s identity firmly on one side of the political spectrum or the other? And how can church leaders maintain peace while speaking the truth on important social issues—without either alienating parishioners who disagree or resorting to inane bothsiderism?

Widely respected pastor and ethicist Robin Lovin offers sage counsel in this helpful book, arguing that to resist the trend of polarization in our church we must rediscover how the gospel teaches us to understand ourselves, our neighbors, and the purpose of politics. In part one, Lovin provides an overview of the situation in which we find ourselves, showing how polarization developed over recent decades and how, in both our society and our churches, we have adapted to division as the norm. In part two, he considers how Christians can shape a different response by learning to listen—to the Word of God, to the world, and to those who are not usually heard. With questions for discussion and reflection aligned with the content of each chapter, What Do We Do When Nobody Is Listening? provides an accessible roadmap for navigating out of the morass of polarization into a brighter future of church unity, during election seasons and beyond.

Robin W. Lovin:
Robin W. Lovin is an ordained minister in the United Methodist Church. He formerly served as the William H. Scheide Senior Fellow in Theology at the Center of Theological Inquiry in Princeton, New Jersey; as the Cary Maguire University Professor of Ethics at Southern Methodist University; and as dean of SMU's Perkins School of Theology. He is also a past president of the Society of Christian Ethics and a contributing editor to The Christian Century. His other books include An Introduction to Christian Ethics: Goals, Duties, and Virtues and Christian Realism and the New Realities.