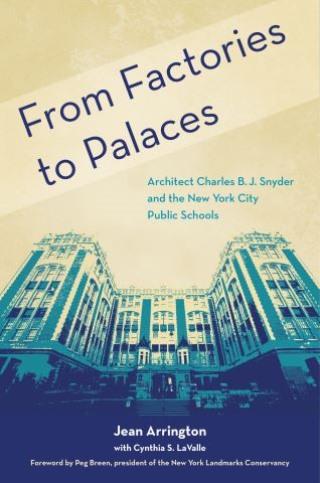 From Factories to Palaces

As Superintendent of School Buildings from 1891 to 1922, architect Charles B. J. Snyder elevated the standards of school architecture. Unprecedented immigration and Progressive Era changes in educational philosophy led to his fresh approach to design and architecture, which forever altered the look and feel of twentieth-century classrooms and school buildings. Students rich or poor, immigrant or native New Yorker, went from learning in factory-like schools to attending classes in schools with architectural designs and enhancements that to many made them seem like palaces. Spanning three decades, From Factories to Palaces provides a thought-provoking narrative of Charles Snyder and shows how he integrated his personal experiences and innovative design skills with Progressive Era school reform to improve students’ educational experience in New York City and, by extension, across the nation.

During his thirty-one years of service, Snyder oversaw the construction of more than 400 New York City public schools and additions, of which more than half remain in use today. Instead of blending in with the surrounding buildings as earlier schools had, Snyder’s were grand and imposing. “He does that which no other architect before his time ever did or tried: He builds them beautiful,” wrote Jacob Riis. Working with the Building Bureau, Snyder addressed the school situation on three fronts: appearance, construction, and function. He re-designed schools for greater light and air, improved their sanitary facilities, and incorporated quality-of-life features such as heated cloakrooms and water fountains.

This revelatory book offers fascinating glimpses into the nascent world of modern education, from the development of specialty areas, such as the school gymnasium, auditorium, and lunchroom, to the emergence of school desks with backs as opposed to uncomfortable benches, all housed in some of the first fireproofed schools in the nation. Thanks to Snyder, development was always done with the students’ safety, well-being, and learning in mind. Lively historical drawings, architectural layouts, and photographs of school building exteriors and interiors enhance the engaging story.

Funding for this book was provided by: Furthermore: a program of the J. M. Kaplan Fund

Jean Arrington: After twenty-four years as an English professor at Peace College and raising three daughters in Raleigh, North Carolina, Jean Arrington (1946–2022) relocated to New York City in 2005, where she taught at BMCC until 2017. During her New York City stint, she was fascinated by Snyder and his beautiful schools. To showcase this remarkable man and his amazing accomplishments, Jean gave walking tours highlighting various Snyder schools, gave lectures for architectural and historical organizations, and wrote articles for local newspapers.