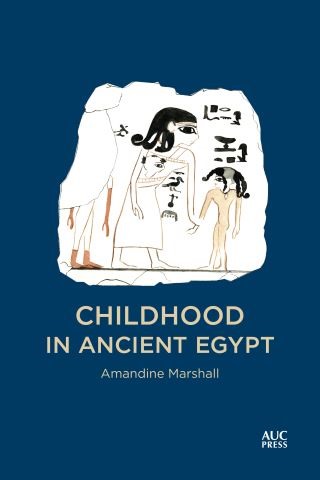 A groundbreaking account of how the ancient Egyptians perceived children and childhood, from the Predynastic period to the end of the New Kingdom

There could be no society, no family, and no social recognition without children. The way in which children were perceived, integrated, and raised within the family and the community established the very foundations of Egyptian society. Childhood in Ancient Egypt is the most comprehensive attempt yet published to reconstruct the everyday life of children from the Predynastic period to the end of the New Kingdom. Drawing on a vast wealth of textual, iconographic, and archaeological sources stretching over a period of 3,500 years, Amandine Marshall pieces together the portrait of a society in which children were ever-present in a multiplicity of situations.

The ancient sources are primarily the expressions of male adults, who were little inclined to take an interest in the condition of the child, and the feelings of young Egyptians and all that touches on their emotional state can never be deduced from the sources. Nevertheless, by cross-referencing and comparing thousands of documents, Marshall has been able to explore how ancient Egyptians perceived children and childhood, and whether children had a particular status in the eyes of the law, society, and the Egyptian state. She examines the maintenance of the child and the care expended on its being, and discusses the kinds of clothing, jewelry, and hairstyles children wore, the activities that punctuated their daily lives, the kinds of games and toys they enjoyed, and what means were employed to protect them from illness, evil spirits, or ghosts.

Illustrated with 160 drawings and photographs, this book sheds unprecedented light upon the experience of childhood in ancient Egypt and represents a major contribution to the growing field of ancient-world childhood studies.

Amandine Marshall: Amandine Marshall obtained her PhD in Egyptology from the Ecole des Hautes Etudes en Sciences Sociales (EHSS), Toulouse. She is a research associate with the French Archaeological Mission of Thebes West, a scientific advisor for French television, and the director of two bilingual Egyptological channels, ToutankaTube (for adults) and NefertiTube (for children and teachers). She is the author of twenty-two books.