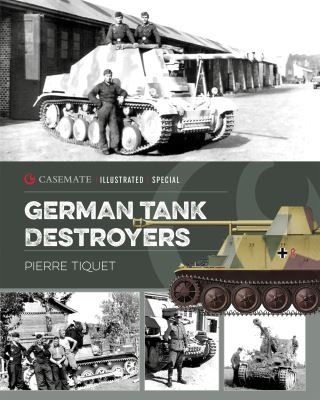 Includes coverage of all the tank destroyers used by the German army including the Hornisse, the Jagdpanzer 38, the Jagdpanzer IV, and the Elefant. From the early days of World War II, it was clear that the Wehrmacht’s antitank units would need to be motorized as existing horse- or automobile-drawn units were too slow to be effective. Initially, antitank guns were mounted onto available, usually obsolete, tank chassis, such as the Panzerjäger I and II. However German engineers would soon turn to the heavy chasses of the Panzer IV, the Panther, and the Tiger for their tank hunters. It became apparent during the invasion of France that enemy antitank guns were both more powerful and better armored, and improvement became a priority during Barbarossa as German units faced off against the new Soviet tanks. The appearance of the Soviet T-34 in July 1941 meant that the Germans had to quickly come up with something equally powerful. The result was the motorized panzerjäger, faster and more mobile than older towed versions. This was followed in 1942 by the introduction of the 7.5cm gun. Further designs and modifications were informed by reports from the front line. Some of these conversions were very successful and resulted in fearsome tank destroyers deployed to great effect by the Wehrmacht. The lightweight Hetzer, for example, was based on a modified Panzer 38(t) and entered service in 1944. This small tank became Germany’s main tank destroyer during the final stages of the war, and would continue in use around the world even after 1945. Though they may not have looked that intimidating, the Landser were soon won over, and were comforted to have something reliable to stand between them and the Soviet tanks. This account, illustrated by hundreds of period photos, examines the development and deployment of various models of tank destroyers during World War II.

Pierre Tiquet: Pierre Tiquet is an expert on the German armed forces during World War II. Over the last thirty years he has interviewed many veterans of the German army and Waffen-SS, and has curated a large collection of rare photographs. Now retired he concentrates on his collection and his writing. His previous titles include The 3rd SS Panzer Regiment in the Casemate Illustrated series.