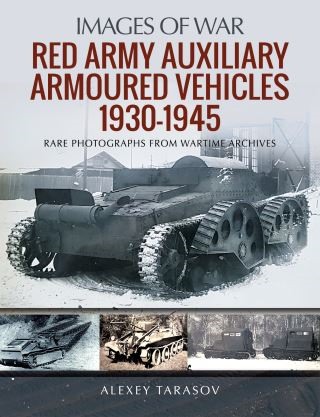 During the 1930s in the Soviet Union a remarkable range of auxiliary armoured vehicles were produced for the Red Army which have rarely had the attention they deserve, and Alexey Tarasov’s photographic history is the ideal guide to them. These innovative designs demonstrate the diversity and innovation of the Soviet arms industry. Among them were armoured flails, ambulances, bridge-layers, flame-throwers and amphibious cars which prefigure similar designs made by western engineers during the Second World War. As this selection of rare photographs shows, Soviet designers were in many ways ahead of their time and it was short-sighted internal policy and the shortcomings of Soviet industry which led to the cancellation or postponement of many of these promising projects. As a result, when faced with Operation Barbarossa in 1941 the Red Army lacked the auxiliary armour that would have helped to stem the German advance. Alexey Tarasov’s in-depth research and the rare photographs he has assembled give a fascinating insight into a little-known aspect of the history of Soviet armoured vehicles.