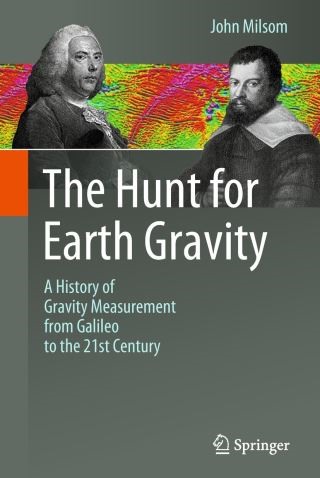 The Hunt for Earth Gravity

A History of Gravity Measurement from Galileo to the 21st Century

The author of this history of mankind’s increasingly successful attempts to understand, to measure and to map the Earth’s gravity field (commonly known as ‘little g’ or just ‘g’)  has been following in the footsteps of the pioneers, intermittently and with a variety of objectives, for more than fifty years. It is a story that begins with Galileo’s early experiments with pendulums and falling bodies, progresses through the conflicts between Hooke and Newton and culminates in the measurements that are now being made from aircraft and satellites. The spectacular increases in accuracy that have been achieved during this period provide the context, but the main focus is on the people, many of whom were notable eccentrics. Also covered are the reasons WHY these people thought their measurements would be useful, with emphasis in the later chapters on the place of ‘g’ in today’s applied geology, and on the ways in which it is providing new and spectacular visions of our planet. It is also, in part, a personal memoir that explores the parallels between the way fieldwork is being done now and the difficulties that accompanied its execution in the past. Selected topics in the mathematics of ‘g’ are discussed in a series of short Codas.

John Milsom: In 1962, armed with a degree in Physics and a Diploma in Applied Geophysics, John Milsom left the UK for Australia, where he worked for the Federal Government as a geophysicist for six years before returning to London for a doctoral study of the gravity field of eastern Papua New Guinea. Since that time he has worked in hydrology, in the oil and mining industries, for governments, in higher education and in conservation projects, but always as a geophysicist. Much of his work has involved the application of measurements of gravity field to understanding geology, at all scales from cavities to continents. In 1981 he founded London University’s first undergraduate geophysics degree, which he taught until retirement in 2004. He retains a link with the academic world as an Honorary Professor in the Department of Earth Sciences at Hong Kong University. He is the author of a textbook on Field Geophysics, now in its (co-authored) fourth edition. Geographically his main research interests and expertise have been in the island festoons of Southeast Asia and Melanesia, but his fieldwork has taken him to every continent. As a result he speaks a number of languages very badly and tends to get them mixed up. Born and brought up in London, he has now returned to his family roots and lives in the Welsh borders where, amongst other things, he is a governor of a small primary school.