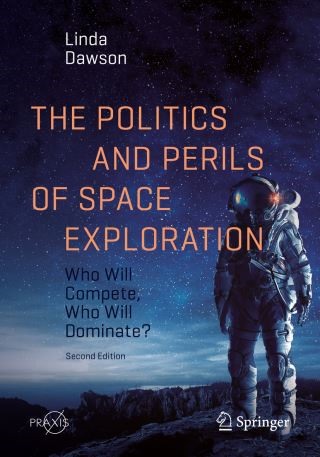 The Politics and Perils of Space Exploration

Who Will Compete, Who Will Dominate?

This book examines the U.S. space program’s triumphs and failures in order to assess what constitutes a successful space policy. Using NASA and the space industry’s complex history as a guide, it draws global lessons about space missions and the trends we can expect from different nations in the next decade and beyond.

Space exploration has become increasingly dependent on cooperation between countries as well as the involvement of private enterprise. This book thus addresses issues such as: Given their tenuous history, can rival countries work together? Can private enterprise fill NASA’s shoes and provide the same expertise and safety standards?

Written by a former NASA Aerodynamics Officer at Houston Mission Control working on the Space Shuttle program, the second edition of this book provides updated information on U.S. space policy, including the new strategy to return to the Moon prior to traveling to Mars. Additionally, it takes a look at the formation of the Space Force as a military unit, as well as the latest developments in private industry. Overall, it is a thought-provoking resource for both space industry professionals and space enthusiasts.

Linda Dawson received her BS in Aerospace Engineering from MIT and her MS in Aeronautics and Astronautics Engineering from George Washington University at NASA Langley Research Center. She is a retired Senior Lecturer Emeritus in Physics and Space Sciences at the University of Washington, Tacoma. She served as an Aerodynamics Officer for the Mission Control Center Ascent and Entry Flight Control Teams during the first space shuttle mission. During orbital phases, she served as an adviser on the impact of system failures on the orbiter's re-entry trajectory and configuration. From re-entry through touchdown, she was responsible for monitoring the orbiter's stability and control, advising the crew of any necessary corrective actions. Her engineering career also included work on space-related projects for Boeing Aerospace. Additionally, she has served on the Space Committee for the Museum of Flight Seattle.

Since retiring from the University of Washington, Ms. Dawson has authored two books on space exploration: "The Politics and Perils of Space Exploration" (1st edition 2017), and "War in Space, the Science and Technology Behind Our Next Theater of Conflict" (2018), both with Springer.