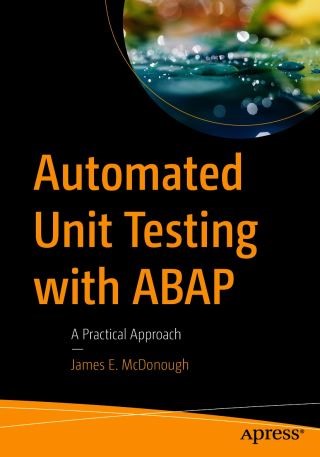 Automated Unit Testing with ABAP: A Practical Approach offers hope and salvation to ABAP programmers who continue to toil with antiquated manual unit testing processes, taking them by the hand and lifting them out of that dungeon of despair with a modern and proven alternative. It begins by explaining how the xUnit family of automated testing frameworks provides a quick and effective means of insuring high-quality software. It then focuses on the ABAP Unit Testing Facility, the xUnit framework applicable specifically to the ABAP language, showing how it can be used to bring ABAP applications under automated testing control, from old legacy applications to those newly written.

Whereas xUnit testing has been widely accepted with developers writing in many other programming languages, it is an unfortunate fact in the ABAP community that many programmers still are unfamiliar with xUnit concepts and do not know how to begin implementing automated unit testing into their development process. This book demonstrates how to refactor programs so they become designed for testability, showing how to use process encapsulation and test isolation to facilitate automated testing, including a thorough explanation of test-driven development and the use of test doubles. The book:

What You Will Learn

Who This Book Is For

ABAP programmers who remain unfamiliar with the automated unit testing facility and those who already use it but want to improve their skill writing and using automated tests. The book addresses the reluctance and trepidation felt by procedural ABAP programmers who need to know some object-oriented concepts to use this facility, expands their horizons, and helps them step through the doorway leading to a different approach to program design.

James E. McDonough: James E. McDonough received a degree in music education from Trenton State College. After teaching music for only two years in the New Jersey public school system, he spent the past 38 years as a computer programmer while also maintaining an active presence as a freelance jazz bassist between New York and Philadelphia. Having switched from mainframe programming to ABAP in 1997, he now works as a contract ABAP programmer designing and writing ABAP programs on a daily basis. An advocate of using the object-oriented programming features available with ABAP, he has been teaching private ABAP education courses over the past few years, where his background in education enables him to present and explain complicated concepts in a way that makes sense to beginners.