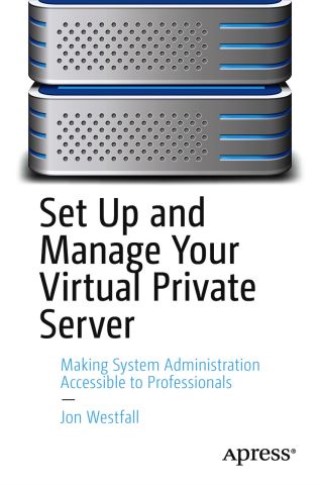 Set Up and Manage Your Virtual Private Server

The need for every professional to have a solid presence on the Internet is more important than ever before. Having a presence beyond an email account, such as a custom web page or web application, usually requires a clumsy assortment of outside services or hiring a dedicated administrator. Thus it is more sensible for the average professional to become adept at managing their own private server.

In Set Up and Manage Your Virtual Private Server, author Jon Westfall expertly designs interesting, understandable lessons for professionals such as teachers, doctors, lawyers, and more to deploy their own virtual private server. He walks you through choosing the right service and customizing it for your specific business or personal needs, and does this with great ease while instilling invaluable knowledge.  Basics such as setting up users, managing security and firewalls, installing and updating software, and troubleshooting by reviewing log files, backing up data, and so much more.

Set Up and Manage Your Virtual Private Server equips you with the power of knowledge to set your web presence apart from the rest. You now have complete control over your virtual brand that is your own—separate from any employer or affiliate. Your career mobility is in your hands with the ability to run your own private server at your fingertips. The digital era centers this technical literacy and independence as a critical skillset.

What You Will Learn
Who This Book Is For
Non-tech professionals, individuals who have an established professional career, looking to understand more about how to set up and manage a private server.

Jon Westfall: Jon Westfall is an award-winning professor, published author, and practicing cognitive scientist. He teaches a variety of courses in psychology, from introduction to psychology to upper-level seminars. His current research focuses on the variables that influence economic and consumer finance decisions, and the retention of college students. With applications to both psychology and marketing, his work finds an intersection between basic and applied science. His current appointment is as an assistant professor of psychology, coordinator of the first year seminar program, and coordinator of the Okra Scholars program at Delta State University. Previously he was a visiting assistant professor at Centenary College of Louisiana, and the associate director for research and technology at the Center for Decision Sciences, a center within Columbia Business School at Columbia University in New York City. He now maintains a role with Columbia as a research affiliate and technology consultant.
In addition to his research, Dr. Westfall has career ties in information technology, where he has worked as a consultant since 1997, founding his own firm, Bug Jr. Systems. As a consultant he has developed custom software solutions (including native Windows 32 applications, Windows .NET applications, Windows Phone 7 and Android mobile applications, as well as ASP, ASP.NET, and PHP web applications). He has also served as a senior network and systems architect and administrator (on both Windows and Unix networks, and hybrids) and has also been recognized as a Microsoft Most Valuable Professional (MVP) 2008 – 2012. He has authored several books, and presented at academic as well as technology conferences and gatherings.