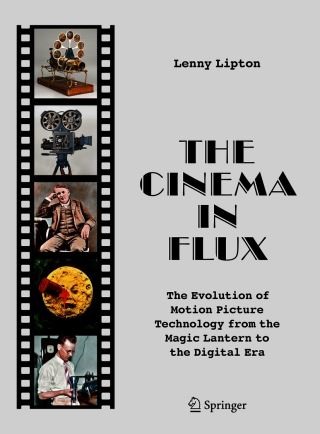 The Cinema in Flux

The first of its kind, this book traces the evolution of motion picture technology in its entirety. Beginning with Huygens' magic lantern and ending in the current electronic era, it explains cinema’s scientific foundations and the development of parallel enabling technologies alongside the lives of the innovators. Product development issues, business and marketplace factors, the interaction of aesthetic and technological demands, and the patent system all play key roles in the tale.

The topics are covered sequentially, with detailed discussion of the transition from the magic lantern to Edison’s invention of the 35mm camera, the development of the celluloid cinema, and the transition from celluloid to digital. Unique and essential reading from a lifetime innovator in the field of cinema technology, this engaging and well-illustrated book will appeal to anyone interested in the history and science of cinema, from movie buffs to academics and members of the motion picture industry.

Lenny Lipton: Lenny Lipton founded StereoGraphics Corporation in 1980 and was the Chief Technology Officer of RealD during the introduction of digital stereoscopic theatrical exhibition. He led the team that invented the ZScreen, used in more than 30,000 RealD 3-D theaters, and was the first to demonstrate the flickerless projection technique used on 80,000 3-D cinema screens. He has written four books, including Independent Filmmaking (1972) and Foundations of the Stereoscopic Cinema (1982). He is a Fellow of both the SMPTE and the SPIE, and a member of the Scientific Council of the Conservatoire des techniques of the Cinémathèque Française. He’s been granted 72 patents in the field of electronic stereoscopic displays and received a Smithsonian award for his invention of CrystalEyes, the original electronic stereoscopic eyewear product, and he received the Lumiere Lifetime Achievement Award from the Advanced Cinema Society. While majoring in physics at Cornell he wrote the lyrics of the song Puff the Magic Dragon. He produced and directed 25 independent films in the collection of the Pacific Film Archive. He lives in Laurel Canyon, California, with his family.