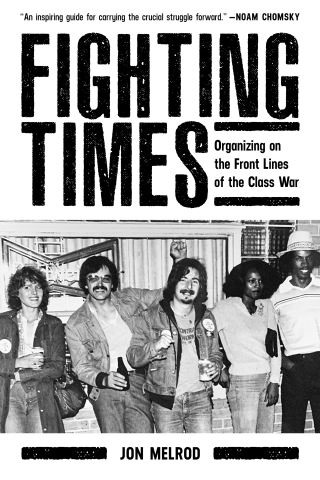 Organizing on the Front Lines of the Class War

Deeply personal, astutely political, Fighting Times: Organizing on the Front Lines of the Class War recounts the thirteen-year journey of Jonathan Melrod to harness working-class militancy and jump start a revolution on the shop floor of American Motors. Melrod faces termination, dodges the FBI, outwits collaborators in the UAW, and becomes the central figure in a lawsuit against the labor newsletter Fighting Times, as he strives to build a class-conscious workers’ movement from the bottom up.

A radical to the core, Melrod was a key part of campus insurrection at University of Wisconsin–Madison. He left campus for the factory in 1973, hired along with hundreds of youthful job seekers onto the mind-numbing assembly line. Fighting Times paints a portrait of these rebellious and alienated young hires, many of whom were Black Vietnam vets.

Containing dozens of archival photographs, Fighting Times captures the journey of a militant antiracist revolutionary who rose to the highest elected ranks of his UAW local without compromising his politics or his dedication to building a class-conscious workers’ movement. The book will arm and inspire a new generation of labor organizers with the skills and attitude to challenge the odds and fight the egregious abuses of the exploitative capitalist system.

Jon Melrod: Born into the political and cultural quiescence of the 1950s, Jonathan Melrod grew up in apartheid-like Washington DC. Active in the student movement that opposed the Vietnam War and a supporter of black liberation, Jon embraced the ideology that the working class held the power to radically transform society. He left the campus for the factory in 1973. For thirteen years, he immersed himself in the day-to-day struggles of Milwaukee’s working class, both on the factory floor and in the political arena. Despite FBI surveillance and interference, Jon organized a militant rank-and-file caucus and rose through union ranks to a top leadership position in UAW Local 72. After a mass workforce cutback imposed by AMC’s joint venture partner Renault, he left to attend Hastings college of the law in San Francisco in 1985. Graduating cum laude with a JD, he opened a law firm in San Francisco successfully representing hundreds of political refugees.