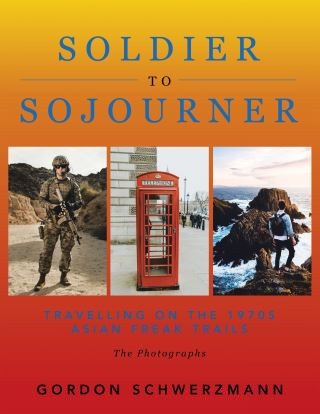 From Soldier to Sojourner

“Soldier to Sojourner” is my photographic impression of North Asia in the 1970s. I spent over a year as an Officer in the U.S. Army in South Korea and close to two years travelling throughout Asia first as a backpacker and later as a freak. These photographs are a companion piece to my written travel journal, surprisingly also called “Soldier to Sojourner”, but these images are not “comic book” illustrations of the written words. The people, places, and events I photographed “through a lens darkly” have an independent life of their own (My God, the Monster lives!) I have documented a time, the 1970s, before the all-pervading Western culture (Sex, Drugs and Rock and Roll in Levi’s) and The Economic Miracle changed Asia irrevocably. Each day in my journey brought new enchantments, incredible beauty, sordid ugliness, joy, and suffering that I tried to capture with my camera. The Asia of Conrad and Maughan is gone, and the war-torn Asia of Vietnam will also pass; every generation discovers a “new”, exotic Asia: This is my snapshot vision of Asia. Enjoy!

Gordon Schwerzmann: I am a first generation American, born of immigrant Norwegian and Swiss parents. I was the first in my family to attend college (Lafayette College) and a second-generation soldier (my father served in the U.S. Army during World War II). I grew up in the 1960s, the High Noon of the American Empire and see myself as a child of both Woodstock and Vietnam. The patriotic idealism of the Peace Corps in the Kennedy years dissipated in the societal division and carnage of a senseless war. Yet my generation believed that everything was possible, we could remake America to be that visionary “Shining City on the Hill “our forefathers had envisioned. It is this optimism that inspired my book. It is also my photographic “Bildungsroman”, a young man trying to understand the world and himself. I have an insatiable sense of curiosity and wonder about the world and this Zeitgeist is what I strive to convey in my photographs.