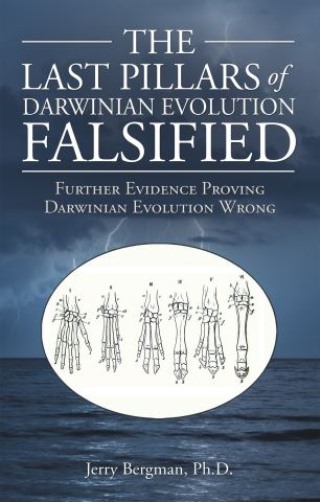 Documents the fact that the peer reviewed scientific evidence has falsified Darwinian evolution. Challenges the common beliefs about the evidence for evolution by logic and research.

The first book, titled The Three Major Pillars of Darwinism Demolished, has falsified abiogenesis (the origin of life itself from non-life) mutations as the ultimate source of all genetic variety, and natural selection, which culls that variety to produce all life on Earth. This volume evaluated other major ‘evidences’ for Darwinian evolution, which have also been refuted by empirical science. These minor pillars are convergent evolution, homology, endosymbiosis, and the antibiotic resistance claim for evolution. It also shows the attempts to refute the irreducible complexity problem have failed and, likewise, co-option cannot explain the evolution of complex features seen in the natural world. In short, an objective review of the published peer-reviewed evidence in secular scientific journals has falsified Darwinian evolution.

Dr. Bergman is a multi-award winning professor and author. He has taught biology, biochemistry, anatomy and physiology, genetics, psychology and other courses for over 40 years at the University of Toledo, The Medical College of Ohio, Bowling Green State University, and other colleges. His 9 degrees include a Doctorate from Wayne State University in Detroit, Michigan. The 1,026 college credit hours he has earned is equivalent to almost 20 master’s degrees. Bergman thus fits in the website The 10 Most Educated People on the Planet ahead of several others. Bergman has spoken over 2,000 times to college, university, and church groups in America, Canada, Europe, Asia, and Africa. So far, over 80,000 copies of his 63 books and monographs are in print in 14 languages, most recently in Arabic. His books are in 2,400 college, university, and major libraries in 65 countries including Hungary, Israel, Mongolia, Montenegro, Namibia, Saudi Arabia, Serbia, and Viet Nam. He lives with his wife of 37 years, Dianne, in Montpelier, Ohio. They have 4 children and 10 grandchildren.