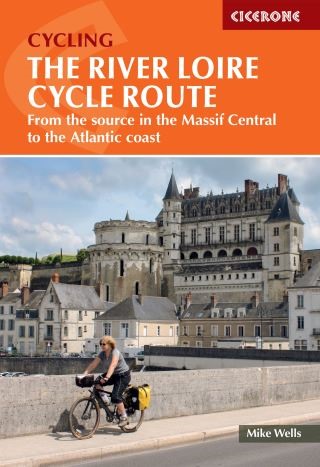 From the source in the Massif Central to the Atlantic coast

The 1061km Loire Cycle Route starts at the source of the River Loire in the Massif Central mountains of central France and finishes at the Atlantic opposite St Nazaire. It descends past extinct volcanoes, crater lakes and deep gorges before joining EuroVelo route 6, followed by the fully waymarked Loire à Vélo, France's most popular cycle trail. Following the river downstream in 26 stages, the route is generally downhill or level, often on dedicated traffic-free cycle tracks. Packed with a wealth of useful information - from practical planning advice to fascinating insights about the river and its surroundings - the guidebook features detailed route descriptions and informative mapping. Details of facilities and places to stay, and a French glossary, are also included. The route goes through the heart of France as the Loire becomes the royal river, bounded by extravagant châteaux, fields of Charolais cattle and vineyards. It passes through historic cities like Orléans and Tours, continuing past Angers and France's fourth largest city Nantes to finish on the Atlantic coast.

Mike Wells: Mike Wells is an author of both walking and cycling guides. He has been walking long-distance footpaths for 25 years, after a holiday in New Zealand gave him the long-distance walking bug. Within a few years, he had walked the major British trails, enjoying their range of terrain from straightforward downland tracks through to upland paths and challenging mountain routes. He then ventured into France, walking sections of the Grande Randonnee network (including the GR5 through the Alps from Lake Geneva to the Mediterranean), and Italy to explore the Dolomites Alta Via routes. Further afield, he has walked in Poland, Slovakia, Slovenia, Norway and Patagonia. Mike has also been a keen cyclist for over 20 years. After completing various UK Sustrans routes, such as Lon Las Cymru in Wales and the C2C route across northern England, he then moved on to cycling long-distance routes in continental Europe and beyond. These include cycling both the Camino and Ruta de la Plata to Santiago de la Compostela, a traverse of Cuba from end to end, a circumnavigation of Iceland and a trip across Lapland to the North Cape. He has written a series of cycling guides for Cicerone following the great rivers of Europe.