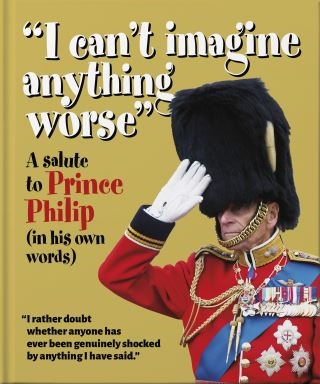 'I can't imagine anything worse'

A salute to Prince Philip (in his own words)

Prince Philip was a man of many, many words. For almost eighty years since he first entered the public's eye, Prince Philip had been telling the world exactly what he thought of it.

Over the years, Prince Philip's quips and wisecracks have been labelled as shocking and even outrageous, but at the root of this colourful royal was a very funny man who seemingly never took life too seriously. He was an icon of the royal family and a reminder of a time when the world was a different place – and for that, we, the Great British public, salute him.

This tiny tome is a celebration of his extraordinary life in the service of his subjects, as well as a compilation of his best (and worst) one-liners, in his own inimitable style.

'I rather doubt whether anyone has ever been genuinely shocked by anything I have said.'
Prince Philip, in an interview, 1999.

Smashing Fact No.1:
Philip was 13 years old when he met his future wife, Elizabeth. They were both attending the wedding of Princess Marina of Greece and the Duke of Kent in 1934. Elizabeth was eight at the time. The pair met again five years later.