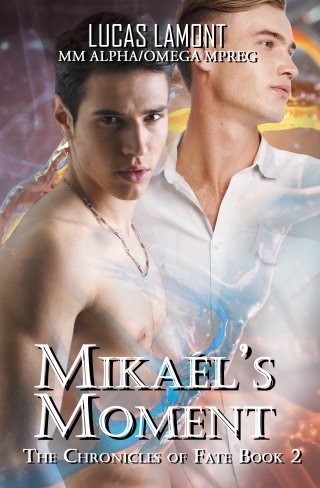 Roman and Mikael Cavenbelle are expecting a child.
With Mikael’s newfound status as a Type 6 Omega, the first of his kind, his pregnancy is an unprecedented phenomenon. Fearing a dismal death rate, both men's Alpha fathers urge their sons to move to the Western Territory under the renowned care of Dr. Ehan Zang. But Roman and Mikael refuse.
Misfortune and tragedy strike when people who want nothing more than to see Roman and Mikael fail begin threatening their partnership. When word of Mikael’s unique Blood-Type becomes public, the acts committed against them grow more heinous. Now more than ever, their relationship and mere existence are in jeopardy. And this time, no one in their lives is immune to the fallout.
New and old enemies alike challenge the life Roman and Mikael have built together in this second installment of The Chronicles of Fate. Will the couple's love be strong enough to prevail in their ever-changing world or will the reveal of life-changing secrets be enough to end it forever?
Mikael's Moment includes: continuing relationships, constant reveals, hot/steamy scenes, knotting, mpreg, science theory, partial HEA, and a cliffhanger to a planned sequel.

Lucas LaMont: Lucas LaMont lives near the mountains of Colorado and has been a storyteller since childhood. Throughout the years, he has dabbled in fiction and poetry and in his adult writing, most of his focus has been in gay fiction. Recently, he discovered the Omegaverse genre and is obsessed with it! During the Covid pandemic, he found his favorite series to read: The Adrien English Mysteries by Josh Lanyon (But he is very much a fan of several noteworthy Omegaverse authors). When he’s not writing and reading, Lucas loves traveling to fabulous Las Vegas to gamble or staying near the rustic lakes of Minnesota to go fishing. His current focus has been the creation of Boy Love Visual Novels, starting with his first one Fated: Type 6. The goal of his writing has always been to focus on the power of relationships and the journey they take. You can find Lucas Lamont on Facebook, Twitter, Instagram, and Wix.