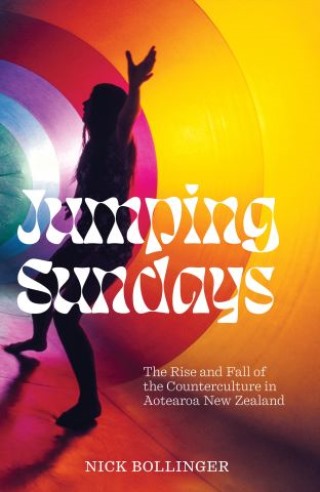 The Rise and Fall of the Counterculture in Aotearoa New Zealand

On a Sunday afternoon in the spring of 1969, thousands of people defied Auckland city bylaws and came to party in Albert Park. A rock band played on the rotunda. Some people held hands, some danced alone, some sat under trees with guitars, flutes and bongos and made music of their own. They wore kaftans, ponchos and leather-fringed jerkins, floppy hats, headbands, beads and flowers. Poetry and political diatribes were delivered from a podium, improvised from an upturned tea chest. There were bikies, balloons, bubbles, sack races and a lolly scramble, lots of dogs and a pet possum. Someone brought a canoe and paddled it around the fountain, until it capsized. As the afternoon wore on there were joss sticks, skyrockets and what some will have recognised as the musky smell of marijuana. . . —From the PrologueIn Jumping Sundays, award-winning writer and broadcaster Nick Bollinger tells the story of beards and bombs, freaks and firebrands, self-destruction and self-realisation, during a turbulent period in New Zealand's history and culture.