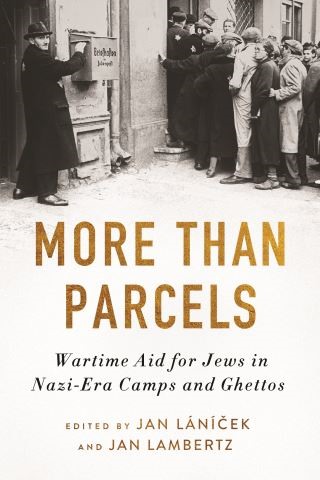 Wartime Aid for Jews in Nazi-Era Camps and Ghettos

More than Parcels: Wartime Aid for Jews in Nazi-Era Camps and Ghettos edited by Jan Lánícek and Jan Lambertz explores the horrors of the Holocaust by focusing on the systematic starvation of Jewish civilians confined to Nazi ghettos and camps. The modest relief parcel, often weighing no more than a few pounds and containing food, medicine, and clothing, could extend the lives and health of prisoners. For Jews in occupied Europe, receiving packages simultaneously provided critical emotional sustenance in the face of despair and grief. Placing these parcels front and center in a history of World War II challenges several myths about Nazi rule and Allied responses. First, the traffic in relief parcels and remittances shows that the walls of Nazi detention sites and the wartime borders separating Axis Europe from the outside world were not hermetically sealed, even for Jewish prisoners. Aid shipments were often damaged or stolen, but they continued to be sent throughout the war. Second, the flow of relief parcels—and prisoner requests for them—contributed to information about the lethal nature of Nazi detention sites. Aid requests and parcel receipts became one means of transmitting news about the location, living conditions, and fate of Jewish prisoners to families, humanitarians, and Jewish advocacy groups scattered across the globe. Third, the contributors to More than Parcels reveal that tens of thousands of individuals, along with religious communities and philanthropies, mobilized parcel relief for Jews trapped in Europe. Recent histories of wartime rescue have focused on a handful of courageous activists who hid or led Jews to safety under perilous conditions. The parallel story of relief shipments is no less important. The astonishing accounts offered in More than Parcels add texture and depth to the story of organized Jewish responses to wartime persecution that will be of interest to students and scholars of Holocaust studies and modern Jewish history, as well as members of professional associations with a focus on humanitarianism and human rights.