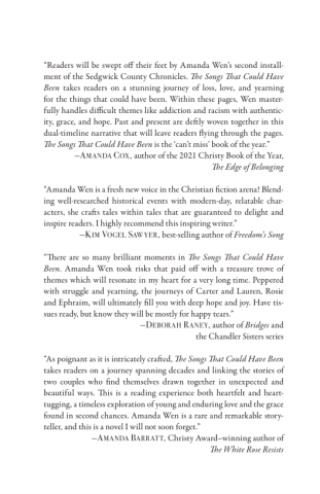 The Songs That Could Have Been

After a tailspin in her late teens, Lauren Anderson's life is finally back on track. Her battle with bulimia is under control, her career is taking off, and she's surrounded by a loving family. Then a chance meeting with Carter Douglas, her first love and the man who broke her heart, leads to old feelings returning with new strength. And suddenly her well-balanced world is thrown off kilter.

Now a TV meteorologist, Carter is determined to make amends with Lauren. After all, she still owns his heart. But the reasons they broke up aren't lost--and those old demons are forcing him toward the same decision he faced in the past. He isn’t sure he's courageous enough to make a different choice this time around.

When Lauren's elderly grandmother, Rosie, begins having nightmares about a man named Ephraim--a name her family has never heard before--a fascinating and forbidden past love comes to light. As Lauren and Carter work to uncover the untold stories of Rosie's past in 1950s Wichita, they embark on a journey of forgiveness and second chances that will change their lives--and Rosie’s--forever. Along the way they'll learn that God wastes nothing, his timing is perfect, and nothing is beyond his grace and redemption.

The Songs That Could Have Been is full of the same deftly handled, resonant writing that readers and critics alike enjoyed in Amanda Wen's first book in the series. Fans of Lisa Wingate and Rachel Hauck will add Amanda Wen to their must-read shelves.

Amanda Wen: Amanda Wen is an award-winning writer of inspirational romance and split-time women's fiction. She was a 2021 Christy Award finalist for Best Debut Novel for Roots of Wood and Stone, the first book in the Sedgwick County Chronicles. Her pre-publication writing has placed first in multiple contests, including the 2017 Indiana Golden Opportunity Contest, the 2017 Phoenix Rattler Contest, and the 2016 ACFW First Impressions Contest. She was also a 2018 ACFW Genesis Contest finalist. Amanda currently lives in Wichita, Kansas, with her husband and three children.