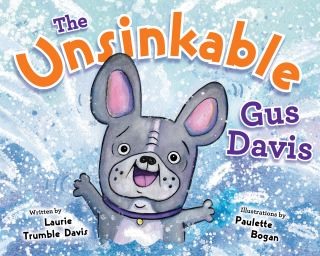 Gus Davis is a French bulldog who thinks he can do anything—even swim. Bean is Gus's human best friend who thinks bulldogs aren't designed for the water.

It turns out, they both are!

All it takes is a persistent bulldog and a creative human friend to prove that, with a little practice and adaptation, anything is possible. The Unsinkable Gus Davis is a playful story about figuring things out, staying safe around water, and laughing along the way!

Laurie Trumble Davis: Laurie Trumble Davis is a book lover who lives in Hopkinton, Massachusetts, with her family. They spend their summers on Cape Cod at Schoolhouse Pond, where Gus, her French bulldog, believed he was the best swimmer on the pond. And he was. . . especially when wearing his life jacket! Although this is her debut picture book, Laurie is no stranger to the world of books and book selling. She has worked for Barnes & Noble coordinating author appearances in New England. She has also done publicity and promotions in news media.