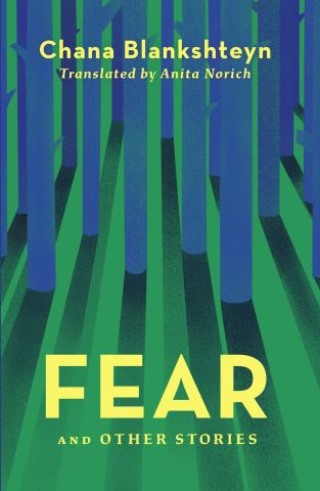 Fear and Other Stories

Fear and Other Storiesis a translation from Yiddish to English of the collected stories of Chana Blankshteyn (~1860–1939), a woman who may be almost entirely forgotten now but was widely admired during her long and productive life. The mere existence of these stories is itself a remarkable feat as the collection was published in July 1939, just before the Nazis invaded Poland and two weeks before Blankshteyn’s death. Anita Norich’s introduction argues that this is not a work of Holocaust literature (there are no death camps, partisans or survivors of WWII), but anti-Semitism is palpable, as is the threat of war and its aftermath. What could it have felt like to live under these conditions? How might a woman who was a feminist, a Jew, and an activist understand the recent past of war and revolution through which she had lived and also confront the horror that was beginning to unfold? The nine stories in this volume take place primarily in Vilna, as well as various parts of Europe. As if presaging what was to come, World War I and Russian civil wars are the backdrops to these stories, as Jews and non-Jews find themselves under German occupation or caught up in the revolutionary fervor that promised them much and took away almost everything. The young women in Blankshteyn’s stories insist on their independence, on equality with their lovers, and on meaningful work. Like the men in the stories, they study, work, and yearn for love. The situations in which these characters find themselves may be unfamiliar to a contemporary reader, but their reactions to the turmoil, the frighteningly changing times, and the desire for love and self-expression are deeply resonant with today’s audience. The history may be specific, but the emotions are universal. Blankshteyn’s stories are both a view of the final gasp of Eastern European Jewish culture and a compelling modern perspective on the broader world. Students and scholars of history and culture, women’s literature, and translation studies will wonder how they’ve gone this long without reading Blankshteyn’s work.

Chana Blankshteyn: Anita Norich is Collegiate Professor Emerita of English and Judaic Studies at the University of Michigan.