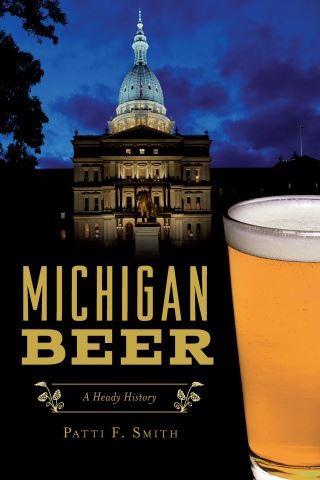 Michigan's beer history is as diverse as the breweries themselves, and the stories behind them are as fascinating as their tasty concoctions.

A few enterprising women found themselves at the forefront of early brewing in the state, and several early Detroit brewers also served as mayor. Pfeiffer's mascot was designed by Walt Disney Studios. Jackson's Eberle Brewing Company took its fight against local prohibition all the way to the Supreme Court, and the Silver Foam trademark embroiled disputants in a different legal fight. Renowned modern craft brewers grew from humble beginnings, often staving off financial disaster, to establish themselves as local, or even national, juggernauts.

Grab your favorite brew and join author Patti F. Smith for a look at Michigan's distant brewing past and its recent triumphs.

Patti F. Smith: Patti F. Smith is the author of three nonfiction books: Vanishing Ann Arbor, Downtown Ann Arbor (Images of America) and A History of the People's Food Co-op Ann Arbor and of one novel. She has written for CraftBeer.com, West Suburban Living magazine, Concentrate, Mittenbrew, The Ann, AADL's Pulp blog and the Ann Arbor Observer. Patti is a frequent public speaker around town, curating HERsay (an all-woman variety show), Grown Folks Reading (story time for grownups), May It Please the Court? (all-lawyer show) and telling stories at Ignite, Nerd Nite, Tellabration and Telling Tales Out of School. Patti serves as a storyteller in the Ann Arbor Storytellers' Guild, and she volunteers for the Ann Arbor Film Festival. Patti lives with her husband, Ken Anderson, and dog, Pugsley Anderson-Smith, in Ann Arbor, Michigan. She loves a good Pilsner in the summer, an Oktoberfest in the fall and stouts all year round.