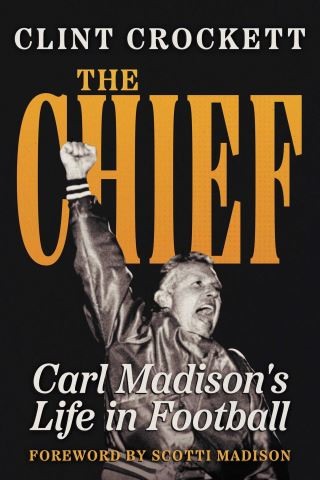 “Whether you love sports or not, do yourself a favor and read this book.” – Evelyn Van Pelt, Managing Editor/Publisher, The Rebel Walk magazine and website

The Chief: Carl Madison's Life in Football pays tribute to a man who defied humble beginnings to become a legendary high school football coach in Florida, Alabama, and Georgia. Although Madison suffered numerous setbacks along the way, and his career was not without controversy, he soared to incredible heights. Over a span of almost fifty years, Carl Madison was tough on the young men he coached, yet he generated loyalty. Many former players credit Madison with impacting their lives beyond the field.

Written by one of Coach Madison's former receivers, The Chief consists of information drawn from newspaper archives and interviews with other former players, assistant coaches, friends, colleagues, and Madison himself.

Clint Crockett: Clint Crockett is a native of Pensacola, Florida who played for Carl Madison at Tate High School from 1981–1982. He became a walk-on wide receiver at Ole Miss for a year before determining that his size and talents might be better suited for intramural fields.

After graduating from Ole Miss with a BA in English and an MBA, Clint has spent virtually his entire career in college textbook publishing and educational technology. He currently resides in Oxford, Mississippi with his wife Janna. They have three grown children, Will, Wes, and Reagan.