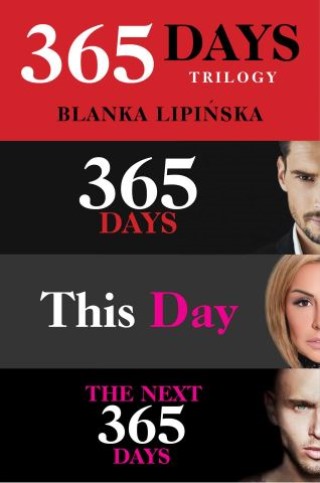 Get transported to Italy with this ebook collection of all three sizzling novels in the instant USA TODAY bestselling 365 Days series that inspired the blockbuster movies on Netflix.

Laura Biel’s dream vacation in Sicily takes a shocking turn when she’s kidnapped by the head of a formidable crime family in 365 Days. The handsome and mysterious Don Massimo Torricelli has his reasons for keeping the young woman in his breathtaking estate, and vows that she will fall under his passionate spell within a year—no matter what.

In the unputdownable sequel, This Day, Laura is enjoying her lavish life in Sicily as the wife of the most powerful—and dangerous—man in the country. But this high life comes with a price, one that could change their lives forever.

Finally, The Next 365 Days brings the story of Laura and Massimo to an unforgettable conclusion, as Massimo must face his worst nightmare: a potential future without Laura by his side.

Blanka Lipinska: Blanka Lipinska is a #1 international bestselling author. Her trilogy has been translated in almost thirty languages and sold in over a hundred countries worldwide with millions of copies in print. She’s an author out of desire rather than necessity and writes for fun instead of money. She loves tattoos, values truthfulness, and treasures altruism. Annoyed with the lack of openness about sex, she took it upon herself to start a discussion about the many sides of love. She likes to say that talking about sex is as easy as preparing dinner. Blanka was ranked as one of Poland’s highest paid writers in 2019 by Wprost magazine. In 2020, the same magazine listed her as one of Poland’s most influential women. The Polish National Library readership survey lists her in the top ten most popular authors in Poland and ForbesWomen magazine included her among the top female brands. Her bestselling novel 365 Days is the basis of one of 2020’s most successful Netflix movies worldwide. The film has spent ten days as #1, the second highest in the chart’s history. The Netflix movie for 365 Days: This Day also shot to #1 in almost ninety countries in the first week.