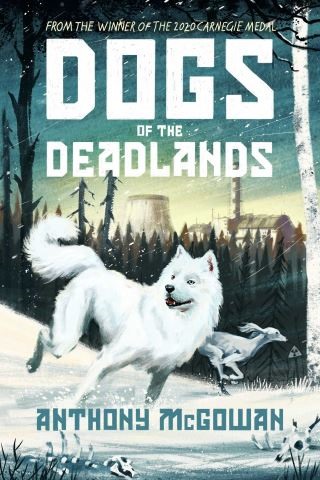 Dogs of the Deadlands

‘This book! It broke my heart and then splinted it back together again. Full of hope and love and wildness... Imagine Watership Down meets The Animals of Farthing Wood but fiercer.’
Hannah Gold, author of The Last Bear

Chernobyl 1986. Those left behind must fight to survive.

The world is coming to an end. Dragged from her bed in the middle of the night and forced to leave her beloved puppy behind, Natasha has no idea if she’ll ever return home.

Growing up in the shadow of the ruined nuclear power plant, pups Misha and Bratan need to learn how to live wild - and fast. Creatures with sharp teeth, scythe-like claws and yellow eyes lurk in the overgrown woods. And they’re watching the brothers…

But will the dogs survive without humans? And can humans live without them?

A devastating tale of courage, companionship and hope from the Carnegie award-winning author of Lark.

Anthony McGowan: Anthony McGowan is one of the most widely acclaimed young adult and children’s authors in the UK. His books have won numerous major awards. In 2020, he was awarded the CILIP Carnegie Medal for Lark. He was also shortlisted for the Carnegie Medal with Rook and won the Booktrust Teenage Prize and the Catalyst Award for Henry Tumour. His YA novel The Knife that Killed Me was made into a critically-lauded film in 2014. Anthony lives in London, with his wife, two children and dog.