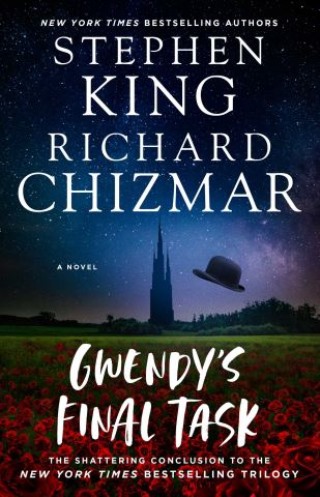 When Gwendy Peterson was twelve, a mysterious stranger named Richard Farris gave her a mysterious box for safekeeping. It offered treats and vintage coins, but it was dangerous. Pushing any of its eight colored buttons promised death and destruction. Years later, the button box reentered Gwendy’s life. A successful novelist and a rising political star, she was once again forced to deal with the temptation the box represented. Now, malignant forces seek to possess the button box, and it is up to Senator Gwendy Peterson to keep it from them at all costs. But where can one hide something from such powerful entities?

In Gwendy’s Final Task, master storytellers Stephen King and Richard Chizmar take us on a journey from Castle Rock to another famous cursed Maine city to the MF-1 space station, where Gwendy must execute a secret mission to save the world. And, maybe, all worlds.

Stephen King: Stephen King is the author of more than sixty books, all of them worldwide bestsellers. His recent work includes Fairy Tale, Billy Summers, If It Bleeds, The Institute, Elevation, The Outsider, Sleeping Beauties (cowritten with his son Owen King), and the Bill Hodges trilogy: End of Watch, Finders Keepers, and Mr. Mercedes (an Edgar Award winner for Best Novel and a television series streaming on Peacock). His novel 11/22/63 was named a top ten book of 2011 by The New York Times Book Review and won the Los Angeles Times Book Prize for Mystery/Thriller. His epic works The Dark Tower, It, Pet Sematary, Doctor Sleep, and Firestarter are the basis for major motion pictures, with It now the highest-grossing horror film of all time. He is the recipient of the 2020 Audio Publishers Association Lifetime Achievement Award, the 2018 PEN America Literary Service Award, the 2014 National Medal of Arts, and the 2003 National Book Foundation Medal for Distinguished Contribution to American Letters. He lives in Bangor, Maine, with his wife, novelist Tabitha King. |||Richard Chizmar is the coauthor (with Stephen King) of the New York Times bestselling novella, Gwendy’s Button Box and Gwendy’s Final Task. Recent books include The Girl on the Porch; The Long Way Home, his fourth short story collection; and Widow’s Point, a chilling tale about a haunted lighthouse written with his son, Billy Chizmar, which was recently made into a feature film. His short fiction has appeared in dozens of publications, including Ellery Queen’s Mystery Magazine and The Year’s 25 Finest Crime and Mystery Stories. He has won two World Fantasy awards, four International Horror Guild awards, and the HWA’s Board of Trustee’s award. Chizmar’s work has been translated into more than fifteen languages throughout the world, and he has appeared at numerous conferences as a writing instructor, guest speaker, panelist, and guest of honor. He is the author of Chasing the Boogeyman. Follow him on Twitter @RichardChizmar or visit his website at: RichardChizmar.com.