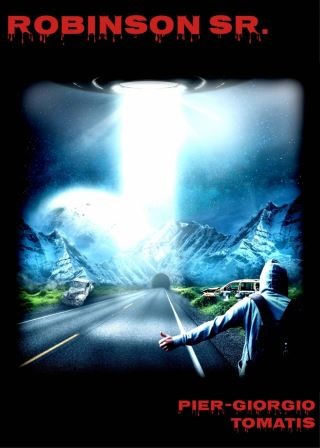 The aliens are back. Save yourself ...

Robinson Sr. by Pier-Giorgio Tomatis
The aliens are back. Save yourself ...
Robinson Sr.
If you thought that the aliens of Blue Paradise were missing, you will have to change your mind. They are back. More deadly than ever. They still want our planet and they don't care about the fate of its inhabitants. Our only luck is to have Peter Cruise among us: the human who is the greatest killer of aliens in the entire Universe. Will it be enough to save us?

Pier-Giorgio Tomatis: Pier Giorgio Tomatis (publisher)
Hogwords
A screenwriter lent to literature, he is a novelist in pure Anglo-Saxon style who sees his works as if they were cinematographic films.
Pier Giorgio Tomatis
Pier Giorgio Tomatis was born in 1965 in Turin and lives in Pinerolo, a pretty town close to the mountains.
He has always written, short stories and screenplays.
He has collaborated as a freelance journalist with the weekly il monviso and the periodical il piccolo di pinerolo. He was director of the municipal bulletin of saluggia and president of the cultural and social voluntary association sisyphus group. He is the promoter of the to.t.a.le. association for the dissemination of books and performances by zero-kilometer authors. Editor of the projects, reading is magic and 10 small authors, he was a scout educator. He is currently the owner of the Pinerolo publishing house hogwords.
His narrative debut is dated 2007 with the fantasy-thriller Gateland.
In 2008, Pier Giorgio published Todos caballeros, a story of political satire and also received the mention of the Art association city friend of Turin, as part of the published works, with his novel Robinson Jr.
Satan's womb-Satan's uterus is his fourth literary effort and represents a return to the fantastic themes dear to him. The fantasy-sociological story, narrated in the first person by the protagonist, is an opportunity to create a metaphor on coexistence between people and superstition.
With Enfante terrible of 2010, the author returns to existential themes and especially to an atrocious and cruel pathology as the title of the work suggests.
In 2011 it is the strange case of Doctor Chances that allows him to pay a tribute to one of his favorite authors: Jules Verne.
Crazy and crazy s.p.a. of 2015, theoretically, it is a sequel to Todos caballeros but only for the developed theme, politics, and the literary genre, satire.