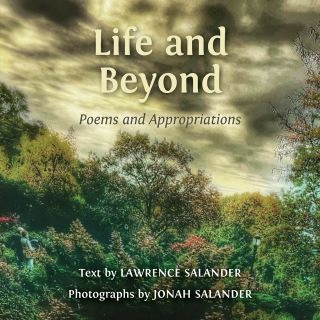 Life and Beyond is a collaboration between the prize-winning film director Jonah L. Salander, who is responsible for the beautiful and profound photographs in this volume, and his father, the artist and poet Lawrence Salander. This book is the result of Jonah Salander’s habit of walking the streets of New York City , where for various reasons—including his love for the city and his profound regard and empathy for the people who live there, and as a tool for his work as a film director—he photographs those vignettes he discovers. These photographs inspired the photographer’s father Lawrence to write the accompanying poems. Lawrence Salander is also the author of Art as I See It, published by Austin Macauley in 2019.

Lawrence Salander: Jonah Salander is a prize-winning director of films including Solace, Rewind, Ezra, Eight, and Privileged. He was awarded “Best Director” honors for the forty-eight-hour film festival in New Haven, Connecticut in 2014 and directed Sonnet 103 for the Shakespeare Exchange Project at the Algonquin Hotel in 2015. Lawrence Salander was the owner of the world-famous Salander-O’Reilly Galleries in New York and was responsible for presenting over 600 museum-quality exhibitions to the public. He has been a working and exhibiting artist for over 50 years. He is the author of numerous articles and essays on the subject of art, most recently a book entitled Art As I See It (Austin Macauley). He is the father of seven and lives in Dutchess County, New York.