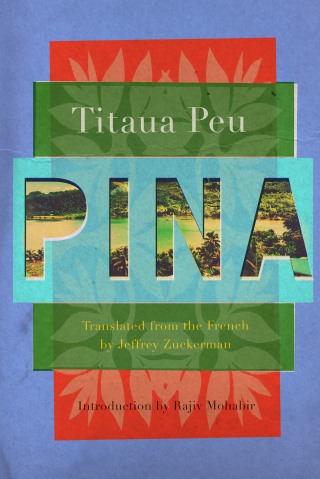 From award-winning Tahitian author Titaua Peu comes Pina, a devastating novel about a family torn apart by secrets and the legacy of colonialism, held together by nine-year-old Pina, a girl shouldering the immeasurable weight of her family’s traumas.

Far from Tahiti’s postcard-perfect beaches, Ma and Auguste and five of their nine children live a hand-to-mouth life in destitute, run-down Tenaho. Nine-year-old Pina, abused and neglected in equal measure, is the keeper of her family’s secrets, though the weight of this knowledge soon proves to be a burden no child could ever bear.

A victim of her father’s alcoholic rages and the object of her mother’s anger and indifference, Pina protects her younger sister, Moïra, as best she can, but a tragic accident upsets the precarious equilibrium of the family, setting them on a path to destruction. The fault lines of her family, descendants of Mā’ohi warriors who once fended off European settlers, begin to shift and crack open, laying bare how the past shapes and haunts the present: her brother Pauro falls in love with a Frenchman, her sister Rosa sinks into sexual exploitation as a futile means of escape, her eldest brother August Junior’s addictions and temper may lead him into ruin, and Hannah, the oldest daughter who had escaped to France, is beckoned back home, fearing the worst.

Elegantly translated from the French by Jeffrey Zuckerman, Pina introduces a bold and profoundly humane anticolonial writer. It’s a gut punch of a novel that traces the history of a family, an island, and a people, reaching back to a time before colonial rule and stretching into an imagined, hopeful future of independence and autonomy, offering the promise of redemption.

Titaua Peu is a Tahitian author known for her politically charged, realistic portrayal of the effects of colonialism on contemporary Polynesia. Peu’s first novel, Mutismes, was published in 2003, making her the youngest-ever published Tahitian author at age twenty-eight. Pina was awarded the 2017 Eugène Dabit Prize, a first for Polynesian literature. She currently lives in Tahiti where she serves as the general manager of the municipality of Paea.