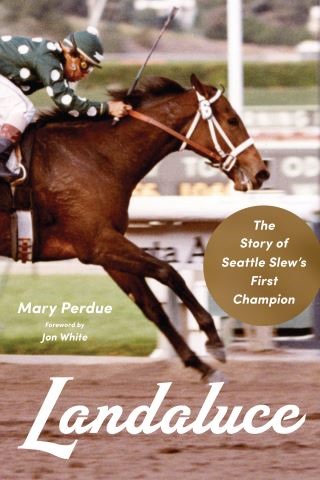 When Triple Crown winner Seattle Slew retired from racing in 1978 to stand at stud at Spendthrift Farm, no one could be certain he would be a successful sire. But just four years later, his dark bay daughter Landaluce won the Hollywood Lassie Stakes by twenty-one lengths—a margin of victory that remains the largest ever in any race by a two-year-old at Hollywood Park. California horse racing had a new superstar, and Slew was launched on a stud career that would make him one of the most influential sires in North America. Like her father, Landaluce soon became a national celebrity, and was poised to become the next American super-horse. But those dreams ended when the two-year-old died in her stall at Santa Anita four months later, the victim of a swift and mysterious illness. Today, with her "I Love Luce" bumper stickers long gone, the filly has been largely forgotten.

In Landaluce: The Story of Seattle Slew's First Champion, Mary Perdue tells the story of a horse whose short but meteoric career could have changed racing history forever. Sparking comparisons to Ruffian, Landaluce helped elevate California horse racing to the national stage and could have been the first filly to ever win the Triple Crown. In telling this story, Perdue explores the lives and careers of Landaluce's breeders, owners, and trainer, D. Wayne Lukas, as well as her famous sire Seattle Slew—and shows not only how one filly captured the imagination of racing fans across the country, but also set the stage for another filly turned super-horse, Zenyatta, in the decades to come.

Find out more at landalucebook.com

Mary Perdue: Mary Perdue is a freelance turf writer and a winner of the Equus WINNIE award.