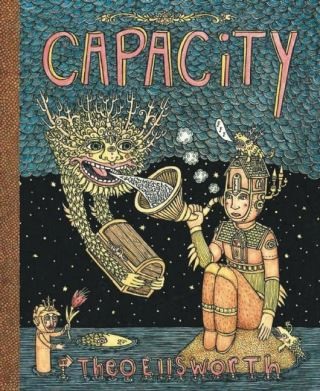 Capacity tells the fantastically true and truly fantastic personal history of the artist as a young man. Theo Ellsworth's astonishing drawings, which Pitchfork describes as "a combination of Where the Wild Things Are, a fever dream, a pagan woodland ceremony, and a notebook doodle," give shape to thoughts profound and silly, bringing familiar doubts and hopes to visionary, new life. Just try to remember, this all really happened.

Counted among the best books of its original publication year by the Chicago Tribune, the Village Voice, the Huffington Post and dozens of others, Capacity is returning in a deluxe, special edition.

Theo Ellsworth:
Theo Ellsworth is a self-taught artist and storyteller living in the mountains of Montana with a witch doctor and their two sons. He is a co-founder of the Pony Club Gallery in Portland, Oregon, and has served on the jury of the Small Press Expo's Ignatz Awards. His art, which Pitchfork describes as "a combination of Where the Wild Things Are, a fever dream, a pagan woodland ceremony, and a notebook doodle," has shown at galleries across the country, including Giant Robot in New York and Los Angeles, and has graced the covers of several popular musicians' albums, including Ramona Falls and Flying Lotus. Most recently, he has collaborated with Viscosity Theatre on the stage production of Mystery Mark, incorporating his artwork into the stage design and costumes. A tour of Mystery Mark is forthcoming.