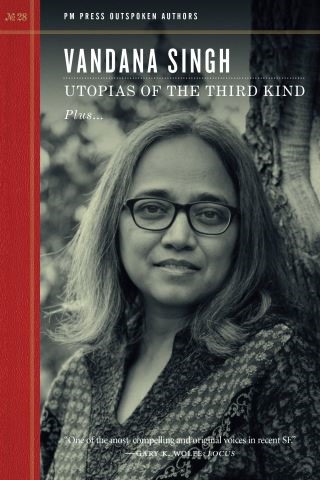 Utopias of the Third Kind

“Arctic Sky” tells of a young climate activist who discovers her own courage in the frozen depths of a Russian prison. “Palimpsest” is set on a bionic (living)space station that launches explorers into the farthest reaches of Time and Space. In “The Room on the Roof” an ancient culture meets modern mysteries with unexpected results. Our non-fiction title piece, “Utopias of the Third Kind,” is a first look at actual utopias that are responding to our looming dystopian nightmare. “Hunger” is a short story that finds both understanding and forgiveness for humankind’s original sin. Our Outspoken Interview and a bibliography round out this new collection.

Vandana Singh is a writer of speculative fiction and a professor of physics at a small and lively public university near Boston. Her critically acclaimed short stories have been reprinted in numerous best-of-year anthologies, and her most recent collection, Ambiguity Machines and Other Stories (Small Beer Press and Zubaan, 2018) was a finalist for the Philip K. Dick award.  A particle physicist by training, she has been working for a decade on a transdisciplinary, justice-based conceptualization of the climate crisis at the nexus of science, pedagogy, and society. She is a Fellow of the Center for Science and the Imagination at Arizona State University. She was born and raised in India, where she continues to have multiple entanglements, both personal and professional, and divides her time between New Delhi and the Boston area. She can be found on the web at http://vandana-writes.com/.