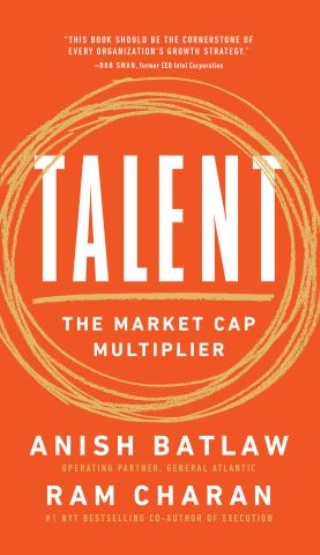 How do some Companies Multiply their Market Cap several times over?

In this book, General Atlantic’s Operating Partner Anish Batlaw and veteran business advisor and New York Times bestselling author Ram Charan, show you how to build and incentivize management teams that can multiply enterprise value several times over in 4-5 years.

No matter how high your company’s growth goal is, you’ll get from here to there by learning from this book’s riveting narrative of the high-stakes personnel decisions and bold actions taken by CEOs, investors, and boards who grew six real—and world-class—companies, ranging from ecommerce startups to major corporations like Johnson & Johnson. Told from both authors’ firsthand vantage point inside each company, and from Batlaw’s active role in shaping their outcomes, TALENT offers a rare inside look at how shareholder value is created when CEOs move with speed and accuracy to get the right leadership teams in place.

How can you be sure that your company can grow its value as much as these six companies did? By learning from the versatile and replicable methodology presented in this book, which has worked effectively across geographies, cultures, and sectors.  TALENT is the answer. Now is the time.

Ram Charan: Ram Charan is noted expert on business strategy, execution, building a high-performance organization, 21st century leadership, corporate boards and succession, he has worked with leaders of some of the world's most successful companies, including GE, Bank of America, Verizon, Coca-Cola, 3M, Merck, Aditya Birla Group, and Tata Group.|||Anish Batlaw joined General Atlantic (GA) in 2015 and leads the firm’s Human Capital efforts (people, pay and performance) in support of its global portfolio companies. His responsibilities include development of GA’s talent network, assessment and development of management teams, and executive compensation.