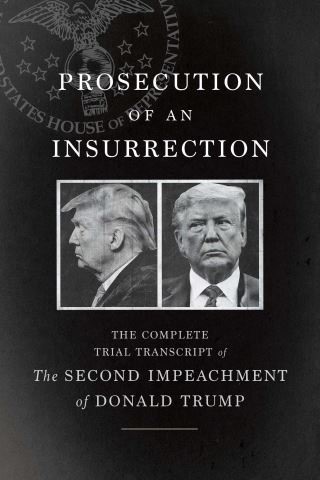 Prosecution of an Insurrection

The Complete Trial Transcript of the Second Impeachment of Donald Trump

The House Impeachment Managers and the House Defense

Prosecution of an Insurrection is the complete, riveting transcript of the historic case against President Donald J. Trump for igniting the January 6 siege of the Capitol. Following the norm-shattering attempt by his followers to disrupt the peaceful transfer of power, the second impeachment trial of the president seared a new lexicon into our collective consciousness and marked a watershed moment in American history. The case, presented to the Senate by impeachment managers from the House, marked a bravura performance by members of Congress who were themselves the targets of the rioters incited by the president only days earlier.

Citizens disturbed by the events of January 2021 and Republican attempts to rewrite history will find in these pages the most authoritative record of one of our democracy’s darkest hours, including:

• The official articles of impeachment against the president for incitement of an insurrection
• The response of President Trump to the articles of impeachment, on behalf of the House defense lawyers
• The complete trial transcript, including the full text of the arguments made by the House representatives and the full text of the president’s defense
• Headshots from the trial of all nine House impeachment managers in action, including lead manager Representative Jamie Raskin, as well as all three House defense lawyers
• Photographs, timelines, and screenshots of tweets entered as evidence, as well as stills from the videos presented

Prosecution of an Insurrection preserves for posterity an episode that ranks with the McCarthy hearings, Watergate, and the Iran-Contra investigation for its importance in American political history.